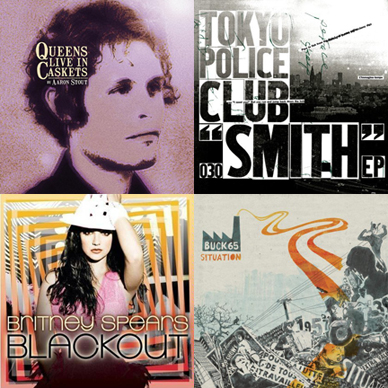 Aaron Stout — Queens Live in Caskets
Meg: Some of my favourite albums of all time are albums that I didn’t necessarily love the first time, or even the second time I listened to them. Sometimes, when you’re not super into an album, the best thing you can do is give it a second chance and listen to it again, while watching the movie Roadie with the sound turned off.

Jeph: That’s true. I’m sure that since every one is well acquainted with the movie Roadie, this review will explain exactly how this album sounds. ‘Nuff said.

Meg: I don’t know if I really explained anything about how this album sounds. Meatloaf is like William Blake, or something. When he’s dead, people will really get it. Meatloaf is genius in Roadie.

Jeph: There you have it people. Check out the movie Roadie. So says Meg.


Tokyo Police Club — Smith EP
If we had kids, we would be fine with letting Tokyo Police Club babysit. That is definitely more than we can say for every band/artist we are reviewing this week. This EP illustrates the kind of maturity we would be looking for in a childcare worker, or band of childcare workers. It is a nice EP. When a bunch of young guys like this get really big quickly, there’s a few paths they can go down. It seems from this, like they are going in the right direction.


Britney Spears – Blackout
Meg: I feel like every problem I have with this album just stems from the fact that Britney was born in the wrong time. It’s like people don’t really know what to do with her now. She could have been like France Gall, but now she’s going to be like Anna Nicole. It makes me sad.

Jeph: Nothing sad about this album. It’s great! Sure, the average person won’t like all the songs. But that’s just because people have different tastes. Some people like slow jams, some people like club tracks. Brit’s got all that on here, but some people just want the one or the other. Me, I love tracks with vocoders and backing computer tracks. That means that for me, this is all beautiful.

Meg: “Nothing sad about this album”? Did you even listen to “Why Should I Be Sad”? Give K-Fed the drug tests. Serious.

Jeph: I just meant nothing sad, artistically. I think that in a couple years Radiohead is going to be ripping off all the stuff on here.


Buck 65 – Situation
We still remember listening to Buck 65 records together in our bedrooms, drinking malt liquor, and wishing Meg was old enough to go to club shows. We even remember hanging out with Buck 65 at Sonar once Meg was of age, talking about songs and how he was getting signed to Warner and thinking what a cool guy he was to be so nice to a couple of obsessed young fans. When we heard the intro of this album, we thought maybe Buck was back to his old self. A nice simple hip-hop instrumental, like at the start of his earlier albums. And then even the first song was alright. We thought he was maybe past his internet insults of rap culture and all that “Wicked & Weird” bullshit. But then his apparent Kid Rock homage “Dang” came on… Not cool. All downhill from there too.