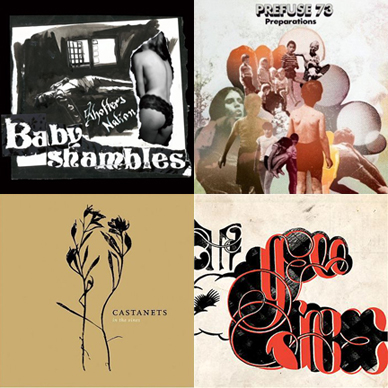 Babyshambles — Shotter’s Nation
Jeph: I always hated the name “The Libertines”, but wanted to support Pete Doherty just because of all the media attention. I kind of like the band name “Babyshambles”. But their music is not really what I picture when I hear the band name.

Meg: I couldn’t even think about wanting to support this guy. Do you remember how many douchebags we saw in the U.K. last month wearing Pete Doherty costumes? No person or music is worth that many misguided hat choices.

Jeph: Actually, I changed my mind. I just listened to all the songs a second time and now I like it. I think I just wasn’t ready for it the first time.

Meg: Instead of listening to Babyshambles, I think people should just watch The Young Ones. I think it would be a much better use of the world’s time.


Prefuse 73 – Preparations
Though neither of us have ever had any hatred of Mr. Guillermo Scott Herron and his music, we have found some of his releases to be a bit on the boring side in the past. When we recently reviewed his latest album (which was released under his Savath and Savalas moniker), even though we liked it, we admitted that it was exceedingly mellow and fit for being used as background music in a restaurant. On the other hand, if we were playing Preparations in our restaurant, shit would be crazy. People would be trying new things like raccoon tenderloin and making out with dogs. Don’t even get us started.


Castanets — In the Vines
Jeph: When I heard the first song on this, I was pretty excited. It reminded me a little of Charles Manson’s folk music, but obviously not as good. But then I heard the rest of the songs and they all sounded a lot like the first. It’s all good. But it’s just one song.

Meg: What’s this? Now you’ve got some sort of problem with “one song”? You think all music by white people sounds the same.

Jeph: That might be true. I hadn’t even really listened to more than a couple of their songs when I said that. I just assumed. The track “And the Swimming” which comes later on actually has a nice almost hip-hop beat. If I could rap, I could probably rap over it. The album is OK, but it needs more drums. And the singer should sing some other notes sometimes.

Meg: What do you mean “if” you could rap? I only married you ‘cos you’re like the one-quarter-Syrian Big Pun. Jeesh.


Subtle — Yell&Ice
When we decided to review this album, we didn’t realize that it is full of reinterpretations and remixes of Subtle’s previous “For Hero: For Fool” album, which the two of us never really listened to. We’re probably not much cut out to do an informed review of this, but we can tell you this: it sounds a lot like a bunch of stuff that you’ve probably heard on Anticon records. The ball is in your court, populace. This is just something you’ll have to figure out on your own.