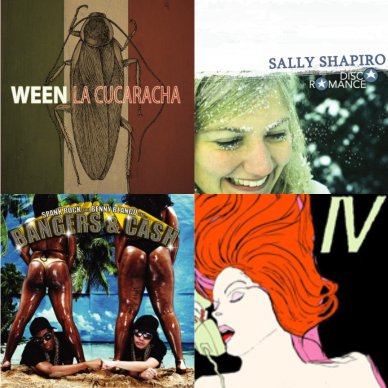 Ween – La Cucaracha
Meg: The first time I ever saw a Ween video was on Beavis and Butthead, when I was baby-sitting in grade seven. I went to Sam the Record Man and the only Ween album I found had a chest-shot of a lady with no bra on and her shirt pulled up. I was flat as a board and super offended and I actually vowed to never listen to another Ween album ever.

Jeph: It’s probably good you waited. I haven’t listened to much Ween in the past, but I’m sure this must be their best album. It’s definitely better than most Ween I’ve heard before. Sure, some songs on this album are revoltingly horrible, but “Your Party” is one of the greatest songs ever recorded. And it’s especially relevant to life partners such as ourselves because it’s about a husband and wife.

Meg: If I worked for Rolling Stone, I would probably go as far to say that “Your Party” just saved rock’n’roll.

Jeph: Definitely. I’d say it reincarnated rock. Because rock was buried deep beneath the earth with hip-hop and R&B standing over top saying: “Suck it, you white muthafucka!” But this really reincarnated rock.


Sally Shapiro – Disco Romance
It’s hard to believe that this album wasn’t made with the intention of serving as a soundtrack for some kind of 1980s children’s fantasy movie. It’s certainly more fitting for a soundtrack than for dancing. The album is called “Disco Romance”, but the songs aren’t romantic: they’re a little bit sad and a little bit scary, kind of like Glen Close’s character in Fatal Attraction. Not that we’re suggesting that Sally Shapiro has borderline personality disorder or anything. The songs are technically disco, but a good dance song should be like the house song Matt Damon describes in Good Will Hunting. A nice slow build-up to get everyone going and then just let loose with the 4/4 bass beats. Go Matt Damon!


Spank Rock and Benny Blanco – Bangers & Cash
Jeph: I thought this would be better than it actually is. I love dirty rap, but this is just a bit boring. What do you think?

Meg: There is no boring dirty rap, only boring people. As a woman, I totally appreciate songs like “B-O-O-T-A-Y” that offer a woman’s perspective on the issue of gigantic asses. I mean, sure, some of us may have gigantic asses, but that doesn’t mean that we don’t have other assets worth paying attention to.

Jeph: Good call. I never really thought of these songs from the woman’s perspective. I guess these songs are all about women. You can tell by the titles like “Pu$$y”, “Loose”, and “Bitch!”. Still though, I’d take a real rapper any day over some postmodern rap-reference like this.

Meg: Me too. I guess if I was in 2 Live Crew, I’d be like: “Thanks for making a tribute album to me, Spank Rock and Benny Blanco, but next time make it better.”


Chromatics – Night Drive
One of the worst things about going to high school in the mid to late ’90s was that technology was making it possible for every loser with a decent computer to make their own “music”. And we had to triple-check the liner notes on this album to make sure that this band didn’t record this in one of our schools’ Recording Arts programs. Although it appears that no one in this band was among our old school-chums, that doesn’t mean that we can’t act like friends and give them some good advice: Hey Chromatics, get a life! Pitchfork.com doesn’t have enough money to buy every copy of your album so try making some real music. That’s just our opinion, but this is really bad.