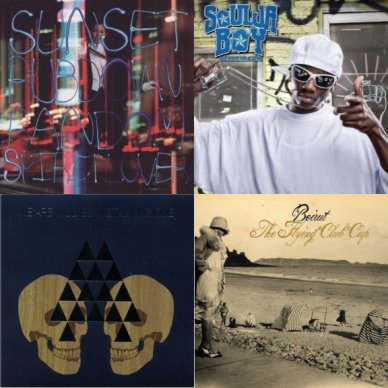 Mosang: What are you trying to accomplish when you make this music? “The Mending of the Gown” is just monotonous wanking, with the guitar noodling and pounding the same piano notes over and over again.

A: Sounds like a failed opera singer practicing his scales. It gets a little more relaxing as you listen to it. Kind of astral and sci-fi.

M: I agree. “Colt Stands Up, Grows Horns” is so fucking King Crimson-y and very atmospheric.

A: Atmospheric and psycho, maybe. It could be in a horror movie. Scared!

M: I can’t stand this kind of singing. All the echoing and cracking voices drive me insane.


Soulja Boy — Souljaboytellem.com
Mosang: Wow. This guy raps about nothing. Take the song “Sidekick”: “Man I can’t believe that I’m rappin’ ‘bout a phone…” Then don’t do it, dumbass.

Amanda: This music gives me whiplash. It makes me think of that scene in Fried Green Tomatoes where the main character gets cut off in a parking lot by some younger girls who steals her spot in their fast car. She gets mad, so she starts ramming her car into their car again and again. Metal against metal — Crunch, Crunch, Crunch.

M: I have to admit, “Yahhh!” is one of the funniest songs I’ve ever heard. “Hey Soulja Boy, can I–YAHHH, TRICK, YAHHH! Get out my face! YAHHH!”

A: It’s like I’m banging my head against the wall–Bam, Bam, Bam. If you want a headache be sure to listen to this.

A: Just ‘cause he’s 15 doesn’t mean I have to like his stupid-ass music.


We Are Wolves — Total Magique
Amanda: I like these guys. They have energy; they’re not so B-vitamin deficient and anemic. They mean what they play, man. They’d be a good show.

Mosang: The first thing I thought when I heard this album was the Strokes. It’s sort of a hard-‘80s sound with all the synths. The riffs in “Coconut Night” rock.

A: It’s not as pretentious as some of the other music we’ve been listening to. I like the words from “Fight and Kiss”: “You’ve wasted all these years, now come and kiss me.”

M: “Teenage, Bats & Anthropology” has some awesome lyrics. “Swimming and kissing in the summertime, the sun is rising and we feel fine, that’s teenage activity!” Where was that stuff when I was a teen, man?

A: Like Teen Wolf?! That should be the video for this song. Man, that movie’s good. Are they teens, or are they wolves? That’s what I wanna know.

M: The drumming is great on this album. Tons of rolling heavy drums. Rock on.

A: I saw the Hives before they got big. So there. They had an excellent live show in their suits, all choreographed and perfectly timed. They could freeze on a dime.

M: How does that relate to this album?

Mosang: This album has some real Tom Waits and David Byrne style singing, with some dramatic flair.

A: It’s an accordion hon!

M: “The Penalty” makes me think of the Crash Test Dummies, the way he sings high notes and then immediately sings low. The singers are both heartbroken intellectuals. A lot of feeling and a lot to say about it.

A: It’s like everything is in a minor key. There’s fullness and richness to this music. It’s like a small klezmer band. It speaks about pain and sorrow.

M: It’s not as bad as I first thought. At first it just annoyed me. “Cliquot” is actually quite beautiful.

A: It makes me feel like I’m at some old 1800s carnival, with dancing bears and dancing girls. It sounds like my old friend Zubin actually. He traveled the world with his accordion, making money by playing to get from place to place. Very adventuresome.