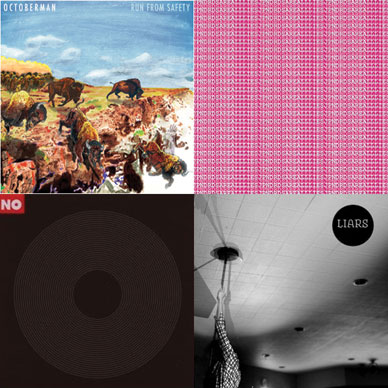 Our regular album-reviewing married couple, Meg and Jeph, left earlier this month on a trip to Europe, requiring us to find a new couple bound by union. We honestly racked our brains for weeks trying to think of a substitute before remembering our adorable friends, Mos and Amanda. They were the perfect replacements: totally in love with each other and music. What made them even better was that they hadn’t heard of, or at least heard the music of, a bunch of the bands we asked them to review. Probably too busy being married and awesome.

Mosang: A lot of these songs have good foundations, but there are too many horns and metaphors piled on. It reminds me of a new, poppy Wilco. How old is Octoberman anyway to be dragging his old bones up the stairs?

A: Like my old nemesis Blues Traveler. The pensive wonderings about life just seem borrowed; musings on others’ musings.

M: 6th Avenue Heartache! “Elbow Room” totally channels The Wallflowers, not to mention the Ice Cube reference. “Diggity check yo self before you wreck yo self!” Man, that song’s good.

A: “Shit Just Falls Apart” is good, funny and good. The last part of the album is better ‘cause the songs are more basic and purist.

M: The singing and music are totally tight and cohesive.

A: The last song “Chasing Ambulances” is really nice with the violin. He’s all battered and bruised, actually talking about something real.


Japandroids — All Lies (EP)
Amanda: I love that “Whoooo!” in “Couture Suicide.”

Mosang: The guitars on this album are awesome, so crunchy.

A: Nice and heavy like Primus. They’re good yellers. It’s all sing-songy and makes me think of the Gossip.

M: Not so much singing in these songs.

A: Good. I get sick of singing.

M: “To Hell with Good Intentions” cracks me up. It’s so damn snot-nosed and punky. “My love is bigger than your love…” What does that line mean anyway?

A: That’s how we show love in our society. It’s all a big contest, like ‘this diamond really means I love you baby, because it’s so much bigger than all the other girls’ diamonds.’

M: “Press Corps” rocks like Dinosaur Jr. It’s a call to all journalists! It’s got two totally different riffs in it too.

M: I like this album because I can listen to the whole thing on my bus ride to work.


Oh No — Dr. No’s Oxperiment
Mosang: Man, I’d hate to be at this party. Sounds like a bunch of dudes bobbing their heads.

Amanda: I like some of the samples. I just grow weary of it because it all feels overdone.

M: Definitely. I suppose you could use these tracks in your DJ set or something.

M: A bunch of little snippets, just like the “Donuts” album by J Dilla. I’d rather hear them stretched out into full songs.

A: I like the traditional Eastern singing and music on “Heavy” and some of the other songs. I’d rather just hear that.

M: I wouldn’t want to listen to the entire album in one sitting. It’s a bit schizophrenic.

A: It all just sounds watered-down because it’s all such short songs. It doesn’t get you in that trance-y space because a song doesn’t continue on long enough.


Liars — Liars
Mosang: “Plaster Casts of Everything” is a pretty good way to open an album. Sounds like ‘90s rock and grunge.

Amanda: “I wanna run away, I wanna bring you too.” That’s how I feel sometimes. It reminds me of Jane’s Addiction and Red Hot Chili Peppers. It feels like being a teenager.

M: Some of the songs are just noise.

A: They sound like underwater Mazzy Star with the discordant guitar and steady bass. Some of them are too heavy though, like you should be down in your S&M cave.

M: Very droning. I like the rockin’ songs more.

A: I don’t know what they’re saying.

M: I have no idea. I do like “Clear Island”, probably because I can understand what they’re saying.

A: It’s sort of ambient, pretty good but not too many songs I really like. It’s kinda boring.