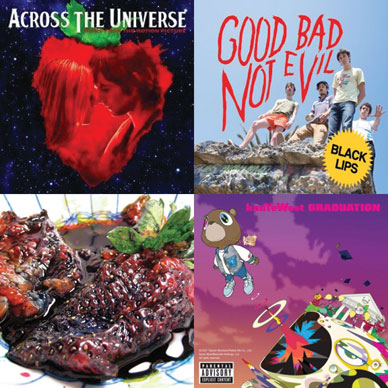 Our regular album-reviewing married couple, Meg and Jeph, left earlier this month on a trip to Europe, requiring us to find a new couple bound by union. We honestly racked our brains for weeks trying to think of a substitute before remembering our adorable friends, Mos and Amanda. They were the perfect replacements: totally in love with each other and music. What made them even better was that they hadn’t heard of, or at least heard the music of, a bunch of the bands we asked them to review. Probably too busy being married and awesome.


Across the Universe
Mosang: This album leaves me with a serious case of Beatles blue balls. I’m left yearning for the real thing.

Amanda: Joe Cocker’s version of “Come Together” is the only one I like because he sings with feeling. He was actually there when the shit hit the fan. It’s a lot of my favorites Beatles songs together on one album, like Happiness is a Warm Gun and Hey Jude.

M: “Let It Be” has some good feeling with the gospel choir.

A: You gotta give props for the gospel. It’s not just a paltry reinterpretation of the real thing.

M: Like the rest of the songs. None of these other singers were even born when the Beatles were around. Frickin’ karaoke singers.

A: I’d rather hear you sing karaoke my love.

M: At least it’s some commentary on what’s going on, just not in an overt way.

A: Yeah, another pockmark on the disgusting face of America. I like this band, so rebellious, stealing from their grandmothers and shit. The Black Lips have it in my book. [singing] “All the bad kids”… yeah yeah.

A: Oh sorry I was lost in reverie. Reminds me of the song “Smoking in the Boys Room”. [singing… again] “Bad kids, living out in the skids, just like you and me.”

M: I like the song about telling kids about death. If anyone ever told me that the person who died was on God’s clock and not mine, I’d punch ‘em in the face.


Kanye West – Graduation
Mosang: I like the first song. It’s very soulful. I’m a sucker for that.

Amanda: There are a few inspiring ballads on this one. Not as rocking as “this is crack music nigga, that real Black music nigga.” And we like the art. The cover rocks. Takashi Murakami.

M: I find his rapping really irritating sometimes because he only says something real every eight lines or so.

M: He’s this decade’s Puff Daddy. He relies so much on old school samples.

A: But we like the “You can’t tell me nothing” song.

A: Some Chicago reference about the streets, that’s it. What a sell out. No backbone. I am over the big ego and the fake smart talk. I like it harder. Harder please.

M: It’s a fine album. You can put it on and just listen to it. It’s got good beats, that’s about it. I’d rather listen to 2Pac rapping over these beats.


Animal Collective — Strawberry Jam
Mosang: It’s a real album ‘cause it really flows together. The last few songs are like the climax.

M: I love the harmonies on “Winter Wonder Land.” It’s so perfect.

A: Like the perfect mix of happy harmony and angst ridden hell. “For Reverend Green” is my favorite. Happy happy and Olympia kid pain mixed in a perfect cake mix. I could listen to it again and again.

A: They’re nice little stories that entertain you. It makes you feel not alone, like they’re with you.