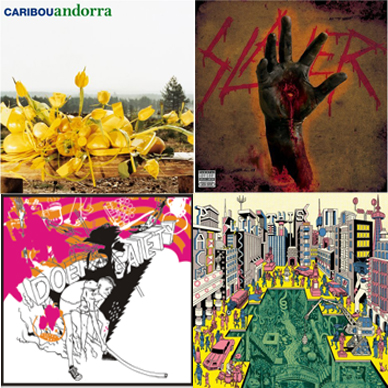 Back in the day, this guy Caribou used to be called “Handsome Dick Manitoba” and he made really great rock music, but then he had to change his name so that he wouldn’t get confused with this other guy called “Manitoba” that was just some ambient electronica artist from Canada. The name change helped us out a lot, because we used to always mix them up. JK! But seriously, what’s with all the songs named after ladies on this album, like “Sandy,” “Desiree,” and “Irene“? If this dude doesn’t cool it, he’s going to have more babymamas than Eazy-E. When it comes to women, it’s quality, not quantity, Caribou.

Jeph: When I started listening to this album, I was a fundamentalist Christian. By the end, I couldn’t decide between atheism and worshiping the “Skeletron Christ” mentioned in track three.

Meg: Stop being ironic. You don’t get it, do you? Kids actually die at Slayer concerts every single year. Are you feeling me? Slayer rocks so hard that it kills kids. It kills them to death. It’s like you didn’t even watch the DVD that came with this CD.

J: Actually, it was the DVD that converted me. Specifically, the point in their concert where they flashed all those giant crosses onto the stage behind them and then turned the crosses upside-down as the song got heavy. That’s when I doubted my old God.

A famous music scientist once said, and we wholly agree, that all songs should be positive and inspirational. We were no doubt thrilled, then, to find out that this album is called Gaiety. In this post-9/11 world we’re living in, couldn’t we all use a little more gaiety? It’s true, that some of these songs get a little bit negative (with heavy messages and all that), but overall, the songs are short and the vibes are golden. These guys even managed to cover Jonathan Richman’s “New Kind of Neighborhood” in a way that didn’t totally make us want to go into a cocoon. Perhaps most impressively, they even did an exact reproduction of the dialogue interludes that occur in the middle of the original version. Nice.

Meg: I thought these guys were pretty cool until I found out that they weren’t a novelty act. I’d rather be listening to Flight of the Conchords. New Zealand is so much better than Australia.

Jeph: Aw man, I didn’t even know these guys came from Australia! I guess I always kinda thought that they actually were from Helsinki. I don’t like the songs where they are doing the whole electro-punk thing. But on a few of the tracks they’ve got some really nice 1950’s do-wop bass vocals in the background. I love that stuff.

M: True. I should stop imposing my own set of impossible-to-attain standards, wherein bands have to be New Zealand-originated novelty acts to be any good to me. I actually really like three quarters of this album, but it has to be said that I know a way better steel drum player than the one on “Heart It Races.”

J: The more I think about it, the more I realize that none of these songs are electro-punk.