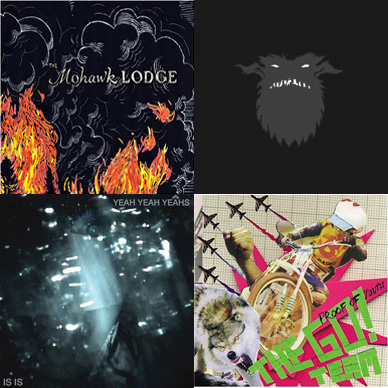 Meg: Hmmm… This is the kind of album I probably would have liked to have around when I was fifteen. It would have been good for when I went on roadtrips with my parents. If they got mad at me for playing Suicidal Tendencies in the car, I could put this album on and be like, “Here, Mom and Dad. This is an album we can all enjoy.” That way, I wouldn’t have to listen to an old Juno Awards compilation.

Jeph: Don’t speak so soon. Some of these songs might be on a Juno Awards compilation some day. They’ve got that “Adult Alternative Category” now.

M: Oh yeah. Do you think these guys even have mohawks?

J: I doubt these guys even have a lodge.

What can we say? Vancouver art collective, The MONSTERDINOSAUR compilation is very various. There are all sorts of songs on here by different artists that could be useful in different situations: Hosting a three-minutes fancy-lady tea party? Throw on ESL’s “Ksiezniczka I Smok”. Considering your own re-edit of some scenes from Aranofsky’s Requiem for a Dream? Try cutting them to Siphonophore’s “Redux/Redux”. Don’t even get us started on PDF Format’s “MD64” and the way it was practically made to enhance games of bridge with your grandmother. You might not like all the songs, but you’ll definitely find them useful for something.

YEAH YEAH YEAHS – IS IS

Jeph: Bands will try to seem interesting by making a crazy experimental song, but then they’ll hide it deep at the end of their album. This Yeah Yeah Yeahs EP takes a braver route by putting their craziest song at the start of the EP. But, in my mind this doesn’t make up for the other 4 boring rock songs.

Meg: I don’t know, I think the whole thing is pretty cool. I’m not totally sure about the first song because I kind of feel like mentioning the word “rocker” in your songs would be better left to bands like Barbie and the Rockers. It might also be cool for someone that has a song about Barbie and the Rockers.

J: Good point. I tried to avoid the song titles and the lyrics, but if I had seen that the first song was called “Rockers to Swallow” I might have just skipped to the next track.

M: Now, I just feel like you’re being prejudiced.

THE GO! TEAM – PROOF OF YOUTH

The Go! Team’s latest album is proof that sometimes the British just get it right. A lot of bands try to mix-up a bunch of cool sounds, hoping that the end product will also sound cool, and it explodes in their face; but on Proof of Youth, this band ties a bunch of sounds together in a way that makes it sound as good as it should. Chuck D is on this album! We only wish we had been able to hear the Go! Team’s cover of Sonic Youth’s “Bull in the Heather” that the band’s website said was on here. Does anyone remember how cool the video for “Bull in the Heather” was?