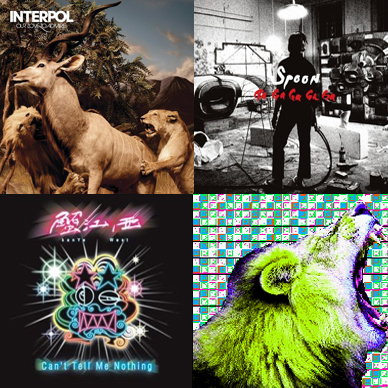 INTERPOL – OUR LOVE TO ADMIRE

Jeph: I think this album is purposefully un-commercial. I don’t see why a vapid pop band would do that. I wish I was the A&R guy at their record label. I’d be like: “Guys. I can’t sell this! It’s not commercial enough.”

Meg: When I was listening to this on my iPod, it was really hot out and there was this old man with a cowboy hat and all the buttons on his shirt were undone. He stopped in the shade and leaned up against the wall and pulled a chicken drumstick out of a crumpled up Super-Value bag he was carrying, and started eating it. That’s about the best thing I can say about this album.

When God was handing out band names these guys must have been in line behind Matchbox 20. Wikipedia says that they got their band name from a song by the band Can, but is that any better? This album opens with a song called “Don’t Make Me a Target,” which sounds like something that would be played over a montage during a show like HBO’s John from Cincinnati. You know, when they need something that helps set a mood but ultimately just blends into the background. The same could be said about the rest of this album: a collection of background music fit to play over something else. The song “Eddie’s Ragga” is okay because it reminds us of Geggy Tah’s “Whoever you are”.

KANYE WEST – CAN’T TELL ME NOTHING (The Official Mixtape)

Meg: Was Kanye just talking over a Daft Punk song?

Jeph: Yeah. I think that was some sort of intro. Better than his horrible skits from the Late Registration album.

J: You’re trying to trick me into reviewing Daft Punk. This is a good mixtape though. It gives me confidence in Kanye.

M: I like the song, “Interviews (Interlude)”. Kanye West is totally my type. Like, for if we ever go on a break or something.

J: First off, this isn’t a song, it’s an interlude.

This EP is good for a number of reasons: It has a boy and girl singing together, there’s a secret song at the end, and the keyboards sound like the soundtrack to the best video game. The video game thing is obviously intentional since the first song is called “Iggy’s Castle”, which named after a level in Super Mario World. It’s nice that they sing on this album because singing is better than doing instrumentals. And it’s especially nice when it is a boy/girl combo, because that is always a little bit romantic. Finally, there is nothing better than listening to a really good album and forgetting to turn it off only to discover that there is a secret song at the end. Don’t even act like you forgot about the first time you heard the hidden track on Dookie or Nevermind. [Wait, are you comparing the Canaries to Nirvana? – Ed.]