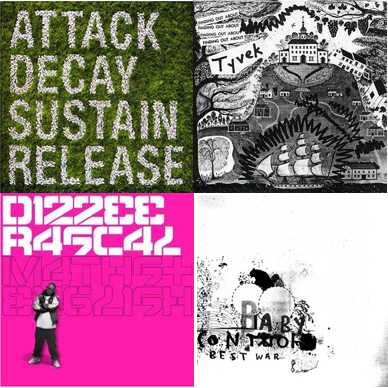 Meg always regretted that she was only ten when Technotronic came out because that meant that she was too young to wear dangly earrings and dance around in stretch pants like the lady in the “Pump Up the Jam” video. Luckily now that she is old enough to partake in such activities, Simian Mobile Disco is picking up right where her beloved Technotronic left off. This album is filled with exact replicas of techno and acid house, but with slight exaggerations to fully play out the gimmick (such as titillating songs with names like “Tits & Acid” or “Hotdog”). We’ll keep this album on shuffle just to be prepared for a real rave comeback. However, if that’s not on the top of your list of priorities, you might want to just keep this one on the shelf. You might also want to re-think your priority list.

Jeph: Do you have some opinions about this album or band?

Meg: Yeah. For some reason it totally makes me think of grade ten, when that really old guy JP was trying to date my best friend, and I used to make him drive me around Maple Ridge and buy me hamburgers. I made so much fun of him, but he used to make awesome mixtapes for his car. This sounds like something he would play.

J: That sounds like a pretty cool grade ten compared to mine. Especially if he was playing music like this. I never listened to much punk music because I thought it went way down the wrong musical path. This is pretty close to what I think punk should sound like.

M: I guess it was kind of a cool year. I should have been nicer to that guy.

This sounds just like his last album, not that there’s anything wrong with that, Showtime was a really good album. But if you already have it, you don’t really need to buy it again, do you? In any case, these new songs do stand on their own in some ways. Though his rapping is almost identical and the beats are a bit more American, he seems to have broadened his horizons lyrically. The song “Suk My Dick” makes a powerful pro-dick-sucking statement and we would be hard-pressed to come up with a decent counter-argument. Also, Dizzee Rascal’s willingness to question whether or not a police officer that kills someone is any different than a murderer on “Excuse Me Please” is priceless. It was enough to adequately convince us that the police might not always be trustworthy.

Jeph: Usually when bands try to bring back grunge they just mess it up. I’ve got half a mind to give those bands a knuckle-sandwich. But this band sounds pretty authentic. I wouldn’t be surprised to hear this stuff on an old Matador or Sub-pop compilation.

Meg: You and your knuckle-sandwiches. Jeesh. That reminds me of the time you went to Zulu and asked if they had any Matador compilations. Or maybe you just asked them if they carried any Pavement albums. I can’t remember.

J: That didn’t happen, you jerk! So, speaking of reviewing Baby Control, what do you think about this album?

M: I like it. I would play it when punks come over to my house. These guys don’t call themselves punk. That’s how you can tell that they’re punk.