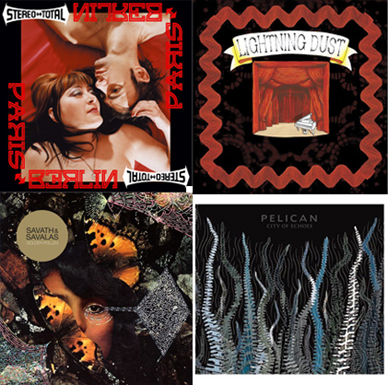 Stereo Total’s ode to “romantic terrorist” Patty Hearst got the two of us into a heated debate about whether or not the Hearst heiress really was brainwashed by the Symbionese Liberation Army. This band is based out of Berlin and performs songs mostly in German and French with some random English thrown in. Lucky for us, we were able to learn German and French from this album, which will help when we travel to Europe in the fall; though we’ll only know how to talk about sexual revolutions, Lolita-ghosts, and Patty Hearst. We are fine with this limitation. In the words of Stereo Total: “Das ist punk. Das ist rock’n’roll. Das ist moderne musik.” So true.

Jeph: So, what did you think of this one?

J: I thought you might. It’s not my sort of music, because it sounds a little bit like a Sarah McLachlan album, but I kind of like the one song that sounds a bit like Garth Brooks’ “Thunder Rolls”. And the recording is beautiful through the whole album.

M: I’m still blown away that the cheating, wife-beater in the “Thunder Rolls” video was really just Garth Brooks wearing a wig. Incredible. But yeah, Amber has a really timeless quality to her voice that I love.

J: That’s true. It’s not that I don’t like her voice. She’s obviously a great singer. She just goes in a direction that I wouldn’t have for this album.

M: Really? I’d love to see what direction you would go in for this album.

J: Did you know this is a side-project by Amber and Josh from Black Mountain?

When we first heard that this was Prefuse 73’s take on latin music, we thought that there would probably be some reggaeton or a cover of “Girl from Ipanema” on here. This is music for lonely Peruvian shepherds. It made us want to start a restaurant where Meg could serve plantain chips to college students who would ask: “Hey, what’s this music?”. Actually, we listened to it while eating our morning cantaloupe breakfast, and that was a nice and mellow start to the day. Unless you know Spanish, you will not know what any of these songs are about, but they are full of slow, jazzy percussion and the smoothest singing in the world.

Meg: So do you like this album, or what?

Jeph: I first listened to this on the bus. It is as boring as hell to listen to on the bus.

M: I remember imagining the opening song playing over the first scene of The Omega Man. The soundtrack to The Omega Man is way better than this album.

J: This album would be really good for if a bunch of friends dropped by really high on ketamine and just wanted to “chill”, or if I was the host of a laid-back air-guitar tournament. But I don’t think I’m going to be in either of those situations any time soon.

M: Maybe this music could be good for a scene in a tv show, where the parent gets home and their teenager is playing loud rock music and they have to turn it down.

J: What are you? Pelican’s agent or something?