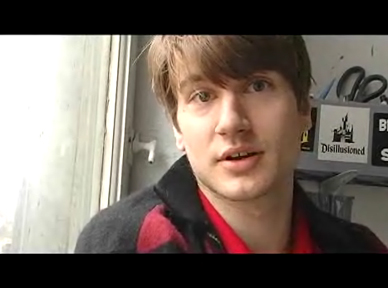 That eight-foot pixelated bunny in Burrard Station is not your usual Basco5 wheatpaste/sticker street art. It’s like that time you heard “Float On” and were mad that some studio band stole Modest Mouse’s sound, then you found out it was really them, and you didn’t know if you were happy or sad. Because it’s a Basco5 ad for chewing gum.

Of course we realise that our recirculating this most recent incarnation of is-it-art-vertising is part of what will make this marketing plan successful and get some Yaletown creative a new patio set. But if it means that more local kids making art might get some money, then we have a few recommendations for hungry ad execs on the authenticity-hunt:

Christy Nyri (Only) and Ben Jacques (Only) would be great for advertising directed towards a younger demographic. Their respectively illustrative and psychedelic cartoon styles could touch both ends of the child spectrum. Chris Frey (Only), Anna Sulikowska (Only) and Dan Siney (Only) are all versatile enough for even the most complicated product shoot.

It’s just too bad we no longer have covers. You might have been the next big Spokesartist.