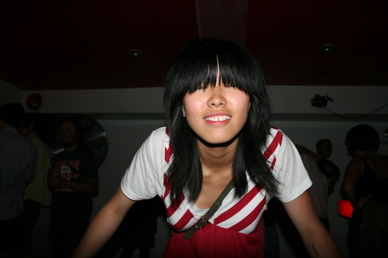 At exactly this time last year, Kathy of kathyisyourfriend.com fame, was well on her way to attaining local hipster celebrity status. Tapping into the party photo craze that guys like Marc the Cobrasnake had been getting famous on in LA and NY, she had every partyperson in this city lining up on a Saturday to get their mug-on for the camera. Oh yes, it was a glorious time to be a Vancouver hipster.

The internet party photo fad is a pretty confusing one. Not because it’s hard to understand why people love to have their pictures taken and displayed on the web, but more confusingly, why certain sites become the popular ones. Just like every other party photo site, no one will argue that what Kathy was doing was anything close to difficult (owning a camera, taking it to parties, using it a lot), so why did her site become something that anyone cared about?

From what we can tell, it’s basically a default thing. LastNightsParty was the first guy doing the party photo thing with any sort of consistency in New York, and therefore his site became the default for the city. The Cobrasnake was the first guy doing it in LA, so his site became the default. Since their job (?) was basically going to clubs and parties non-stop, they eventually became friends with the DJs, and therefore became party scene fixtures. Since NY and LA are pretty large cities, imitation sites inevitably sprung up, some successfully (most notably MisShapes, Ambrel). Kathy was the first person doing the party photo thing in Vancouver, and so her site became popular by default as well.

As we all know, Vancouver is not New York. You’re lucky if you can find half a good party here on a weekend night, let alone two. The fun pool is small, and it is shallow. The fact that Kathy found enough shit to keep her site regular was probably the only impressive thing about it. But ever since she skipped town for the Big Apple, the coveted position of local hipster party photographer (or whatever the fuck you want to call whatever it is these people do) has been up for grabs. Now, instead of one “see how cool you looked at whatever party” destination, there are many. Depending on which night you went out, who threw the party and which chick shoved her SLR in your face, you’ve probably got at least six sites to navigate. In a city with hardly enough exciting shit happening to justify one party photographer, we’ve had enough, and we are calling bullshit.

The people taking these photos are not photographers. If taking party shots with swirly lights all over them was considered art, everyone with a Flickr account would be the next Richard Kern. In the past, this kind of shit would literally be reserved for personal scrap books, or if one were actually so delusional, one might self publish a book of photos “documenting one’s scene.” However, the internet has made books a thing of the past, and scrap books a thing of the public. Everyone’s private, personal shit can now be displayed for all to laugh at. If you’re one of the millions with a MySpace account, we’re all for it, but garnering any sort of pseudo celebrity from extremely amateur photographs in the way the Cobrasnake (who has t-shirts and stickers for sale) and Kathy have is uncalled for and retarded.

And that’s what motivates the crop of new poseurs in Vancouver. It’s not the desire to display art, or be artistic, or cultivate a scene or anything remotely worthwhile. It is simply an attempt to gain some sort of local hipster celebrity status. To stand out as “important” in a sea of all-over-print and Cheap Mondays. Is there anything wrong with wanting to be important? Of course not. The only reason anybody ever picked up a guitar, camera or pen stemmed from a desire to distinguish themselves from the crowd. It’s trying to be important for doing something totally worthless like taking bad photos at parties that we have a problem with.