Time Travel Week at Only Magazine 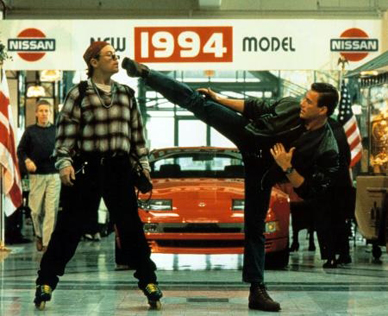 Ever since the overwhelming success of our Tourism Week last month, we’ve been trying long and hard to come up with another theme week that we could all rally around. It’s been slow going. Initially we thought Horrible Local Internet Week would be a good idea since, well, there’s pretty much an endless supply of fodder (present company included). But then we decided that a week long hate-fest of the mediocrity that runs thick through the DSL lines of this city would get boring and repetitive pretty quick. And who wants to be bored? Nobody, that’s who. Stalemate ensued… until last week when we were all sitting at the Astoria watching Bill and Ted’s Excellent Adventure, and had a breakthrough: Time Travel! Everybody does it and knows lots about it, and the concept allows us all the opportunity to write about pretty much anything we want as long as it took place in the past or might take place in the future. Sound vague? You’re damn right it’s vague… Vaguely exciting! Just like the past, the future, and the concept of time itself. Expect a few eye-opening expeditions into the Vancouver of yesteryear, gaze into our crystal ball and see what’s in store for this futuristic city, and expect a few fun little personal anecdotes as well, like what we wish we had done with the past four years of our lives instead of making this retarded magazine.

UPDATE: Shit. Us from a week in the future just traveled back in time to tell now us that this theme is a horrible idea and totally bombs… But what do we know.