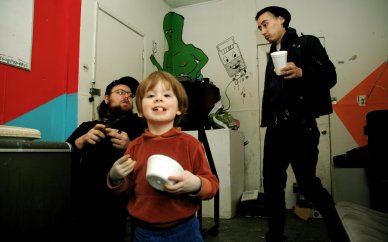 Sometimes I wish I was born boring.

Thursday evening I ditched out on my free ticket to Vampire Weekend at Richard’s because I just couldn’t handle the idea of listening to anything really up-beat or happy. I guess I’m just too Goth or something. I did, however, make my way down to the overly hyped Bourbon where some crazy bitch screamed at me… it was odd. Is it a rumour if it’s a commonly known fact? Threats that were left empty kind of put a damper on any fun to be had, but the herd of hip-kids stumbling around outside after the bar was closed was pretty entertaining to say the least. Did you know that that hot dog stand only sells tofu dogs? Unfortunately I am allergic to tofu.

The Sweatshop was the place to be Friday night for the China Creeps, Grass City and Bison show. I showed up half way through Grass City, who were alright, but the China Creeps rocked my socks off. Their set closed with the crowd turning into a war zone of thrown beer cans. Yes, even I got hit in the head. I could go on more about the bands that I barely remember or I could bring up a certain piece of information that I am very concerned about: apparently somebody died at this show? If anyone knowns anything about that, please do tell! Speaking of the Sweatshop, I think this may be the best new venue around. It has a smaller upstairs gallery for shows/parties, as well as the downstairs with a skate-ramp that compares more in size to the former Sweatshop. My timing must have been horrible because as soon as I got back from the store, the Sweatshop was “at capacity” and I couldn’t get back in. My friends and I hopped a cab down to Mod Club to party it up with Narcs and Urban Warriors (both terms used to describe people who wear crocheted berets, or come out from New West). The music Casey was playing was great, but I would recommend going and listening to it at Get Wizard instead.

Saturday night I watched far too many episodes of House and ate marble cake. I also smoked a lot.

I missed Nu Sensae‘s show at Dance or Die last week for some odd reason, but decided to show face. Pub 340 on a Sunday night is pretty much Cheers for anyone with good-taste in Vancouver. You have Sex Negatives greeting you at the door, Terrorbird pouring your ten dollar pitchers and the Emergency Room playing your favorite dance tunes. Add to that all those ‘friendly’ sorts that go to those shows you like – you know, the ones that are ready raise to glass for just about any reason – and by two thirty in the morning you’re running down back alleys with spray cans and skinning your knee on the concrete.

Thursday night the Pit Pub will be hosting CITR‘s DJ competition. That Chris Wang guy’s in the line up, which sounds pretty alright. The next night, JPNDRDS, Baby Control, Basketball and Taxes will be playing at the Cobalt, City of Glass, Nu Sensae, Ice Cream and Petroleum By-Products will be at the Unicorn, Tranzmitors, White Lung and Vapid will be at the Railway, Black Mountain and Ladyhawk will be at the Commodore, Modern Creatures, Adjective, i/i and N213 will be at Pub 340, Robert Mearns is doing some show at 870 East Cordova, and a bunch of lame people are going to be going to bed early. Saturday is EdgeFest at Hoko’s. There will be a lot of bands and two stages, but all you need to know is that Mount Eerie will be there. It’s eight dollars, starts at eight and ends at Midnight. If you do anything this week, it should be this.