Beat Kids: 12 Steps to a Hangover 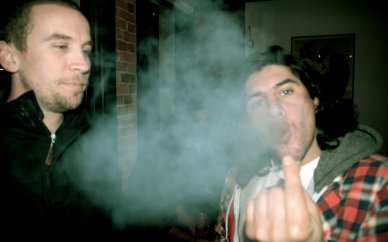 I spent this week going to dance nights mostly because they are the only place where it is acceptable to wear the outrageous clothing that just sits in my closet with the most painful shoes I own.

I don’t think I’ve mentioned in any of my former columns how crazy Friendship Tuesdays at the Astoria can get. This one time some asshole spat in somebody’s beer, which domino-ed into a fight involving a glass being thrown into the road for absolutely no reason. This week the real action was at some Strathcona house where some band that played the Festival of Guns snorted heroin, sexual favors were exchanged in both a closet and a park, a fight broke out and someone tried to fly… I bet you if the beer at the Astoria wasn’t so drunk and the music was less fun a lot of people in this city wouldn’t hook up and a lot more might make it to work on time (my house might be a little more clean too).

Danny Doesn’t and Neil Hillbrandt decided that a classics/soul night at The Narrow (which is a lounge/restaurant that is actually the size of a toothpick) would be a good idea. Guess they didn’t plan on the large turnout… Once more than five people were there I had to exit out the back due to closet-phobia. The cops even turned up, so that’s not happening anymore.

Thursday night, Lo-Fi-Fink came all the way from Sweden to play at Blastramp. This was pretty fun and the band sounded pretty much exactly like the recordings. This was followed with belligerence at an after-party at our photographer’s house where some girl stole everybody’s shoes. Also if you didn’t know, in late-night/early-morning Strathcona you are either being eyed to be mugged or some douche thinks you are a hooker. I need a bodyguard.

Still recovering from my best-friend’s birthday and the longest week of my life, considering rehab and trying to avoid cleaning my house/my hangover, I made a trip towards the Unicorn on Saturday night (DISCLAIMER: being hungover I did not feel like going to see some awesomeness at the Astoria for fear that this would involve some slightly intellectual conversation which I was in no state to carry on). The Unicorn, The Unicorn… it was nostalgic, but they didn’t play a song I really liked ‘til I was leaving, which just so happened to be a song about leaving. I took it as inspiration. The Sweatshop, however, was in full-swing by the time my new ‘posse’ arrived. I had just missed the Jaws and Bison and all those East Van guys which was really unfortunate, BUT Half Alive rocked it and I’m not even being sarcastic. Maybe it was the new Sweatshop, which might I add is more than slightly cleaner than the old one. It’s also smaller and almost reminiscent of the old Blood Alley after parties that the old Salbourg DJs used to put on back in the day. They even sold beer past the legal time! But shhh, you aren’t supposed to know that.

This week there’s not all that much going on, but that’s probably a good thing if you read any of the above… Thursday night, Crooks and Gunn won a spot to play at Republic. Big money! Friday is apparently Steak & a BJ day. Unfortunately I don’t eat that much meat, but The Green Hour, The Monitors and The Trap Doors are playing the Biltmore that night, so I might go. The Sorcerers and 2 DJs on Analog will be at Hoko’s Saturday, and after head to the Emergency Room for the return of White Lung with Petroleum By Products!