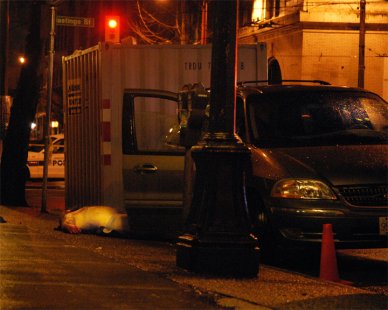 The irony of seeing a dead body — the victim of a fatal shooting — a block away from my home just after having a long discussion with my roommates about how safe our neighborhood is, is frighteningly comical. Not laugh out loud funny, but more like the nervous giggle you get when hoping no one noticed you crapped your pants. The problem is that the smell of shitting your pants follows you wherever you go. In my case, the lingering smell of shit woke me up on Monday morning with a phone call from my mother, worried about possible retaliation from the Hells Angels.

Why my mother would be worried about the strange link between the Hells Angels and me begins with… shopping on Hastings. Through diligent research into the wonderful world of Hastings commerce, I wound up purchasing a gently used digital SLR camera with flash, way below market value. The story here isn’t how I came to accrue such an item, but is how it came to be used shortly thereafter.

It all started with a trip to my local cracky-mart. I was having a laugh with the store clerk about the single serving Shredded Wheat packs he had on his shelves for sale. He didn’t have any other single serving cereals for sale, so I was enjoying the new links I was making into the wonderful world of Hastings commerce. This was short lived because as I was finishing my purchase a woman burst through the doors and breathlessly announced that someone had just been shot “Like 10 times!”

I left the store and walked around the corner to Pigeon Park, where I could see the scene of the crime. The raw mixture of emotions that were flooding through me didn’t divert me from my new mission… to see a dead body.

The scene was impeccably surreal. This was a gangland hit, straight out of the movies. The six gunshots through the minivan windshield were perfectly aimed for a direct kill to the driver (an affiliate of the Hells Angels), who was now laying dead in the arms of a screaming woman… the passenger. As I slowly walked around the vehicle and past the crowds of apathetic witnesses, I began to feel a surge of energy, compelling me to run the whole block home to get my camera, purchased on these very streets just days before.

Becoming a voyeur was a pivotal moment in this bloody mess. I stepped over the line from being one of the many curious members of this strange and surreal community to being a carnivore of it. I can’t apologize for it though, because down here we are all fed by the drama and the hustle in some way or another. My hustle is the story, and holy mother fucking shit, did I ever get one. And, surprise surprise, my quotes and photos ended up in the sweaty palms of The Vancouver Sun, and all of their subsidiaries across Canada. I think it would be easy to assume readers feasted on it gratuitously in the comforts of their safe, suburban homes over a peaceful weekend breakfast.

So there I was, sitting in my crap filled pants, talking to my mother about possible gang retribution because she smelled my shit all the way over on Vancouver Island, all because I purchased a beautiful camera from the Hastings shopping district (which, by the way, cost me exactly $150 less, because that’s what I got paid for my photo being used by the good ‘ole Vancouver Sun).