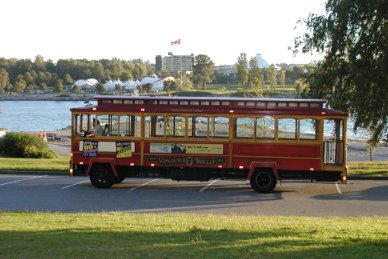 I’m basically and obviously a cynic when it comes to anything touristy. I remember going on vacation with my parents and wanting to throw myself in front of moving vehicles anytime “sightseeing” was involved. This is why I find it particularly nauseating that Vancouver has its own “San Francisco-style trolley”.

First of all, isn’t that San Francisco’s thing? Are we that desperate for touristy shit to do that we have to appropriate culture from our southern neighbors? Or is this just another symptom of Canada losing all of its integrity as it’s slowly assimilated by the USA? It’s like someone was really stoned on our really good weed and thought “shit, that’s what I’m gonna do man. I’m gonna buy an American trolley and drive those dumb motherfuckers around Vancouver all day until they are so bored they’ll have to buy our weed. It’ll be rad.”

I’ve seen it driving around Vancouver (on wheels) at dizzyingly slow speeds, touting the “environmentally aware” aspect of the attraction (I don’t remember when propane became a green fuel). I’m surprised people haven’t been throwing themselves off the bloody thing as they meander through Gastown. Maybe they should create a new route for their passengers. They should drive past skid row, to Hastings and Main, so people can at least stock up on some supplies to keep them remotely interested as they have to listen to some reject talk about Vancouver’s “heritage” sites.

Do I sound bitter? It’s probably because I’ve seen Vancouver systematically destroy and gentrify most of its remaining sites of actual interest in the name of growth and replaced them with these kind of cultural barbiturates. “San Francisco-style trolley”… puke.