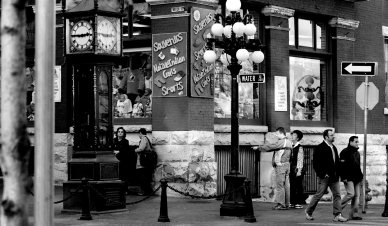 Gastown – a dizzy hub of foreigners, make-up school students and multimedia nerds; also home to a handful of decent bars,eateries and shops. Although haircuts and fonts are exciting to me, there’s nothing that equals the feeling of taking my pug for a quick trot to Starbucks at a quarter to noon and hearing the delightful Westminister quarters fart out of the Steam Clock.

Designed and built in 1977 by Canadian Raymond Saunders, the Gastown Steam Clock was erected as a testament to the re-vamping of the Downtown Port district. The tradition of gentrification of the Gastown area continues to this very day. I sat for an entire 2 hours across the street from the Clock taking notes and candid photos on Monday. Between listening to panhandlers tell tales of how the “car” is out of “gas” and daydreaming, I managed to record some stunning observations concerning Vancouver’s most world famous horological ornament.

The steam clock only attracts Gringos and Asians. The two have distinct behavioral patterns: the white people were reluctant to read the plaque describing the history and technology, if at all. They eagerly gravitated towards the Starbucks across the street and watched the clock go off from a distance on the sunny patio, beverage in hand. However, those of the Asian persuasion kept a keen interest in the technology and I noticed them reading and studying the machine, posing for pictures with it and sticking around after the whistle blew. Some even stayed for 3 whistle blows, gesturing and mimicking the mechanics. My conclusion is that white people are content drinking coffee and standing around, Asians are into complicated technology.

The gift shop on the corner, “Steam Clock T-Shirt & Souvenir Ltd”, sucks. Every piece of crap in this stupid store will end up in a dump or in the Pacific Ocean. From six dollar bags of pearlescent pastel “Steam Clock Gems” to fake sheepskin golf jackets; an ongoing clearance sale stoking the crap fire. The sweatshop made moccasins and child sized personalized native carabiners were radical. Just kidding. On the way out I found the pretty woman working at the hidden counter, surveying black & white camera monitor for the nonexistent customer. I shuffled my way out the door and back into the fidgeting crowd of cell phone photographers, anxiously awaiting the toll of the magic clock.

What we have here is a redundant technological novelty/trap for the traveler. This steaming #2 and the store next to it are insults to every man woman and child in the world.

On the bright side, after I clocked out I enjoyed a great sandwich at Social just up the block. Shine tonight?