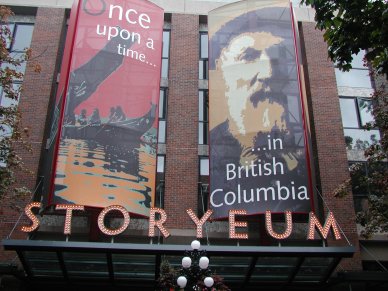 I hate tourist traps. When I travel, I’m definitely more the girl who spreads her legs for the greaseball locals lurking around the youth hostel than the nerd who blows the Contiki tour guide. What can I say? I’m a sucker for authenticity. I even drink the tiny coffees. As such, I was elated when Storyeum proved to be the only tourist attraction shitty enough to defy failsafe pre-Olympic economic trends, also known as converting turds into yen, by closing in 2006.

It’s no huge loss, considering that during its existence most people mistook this museum – oh forgive me, “STORYeum” – for the latest addition to the Donnelly Group. Say it out loud with me a couple times: “Storyeum… Storyeum…” To me the name just screams striped collared shirts and stink-eye with a side of GHB. Alas, nobody knew you could learn the exciting history of BC there and instead confused tourists came trolling for a place to enjoy the salaciously masculine taste of Jagerbombs while showing off their new haircuts. In a sad way then, perhaps it was more the future of BC they were expecting. But regardless, for this reason and a million others, the building has probably been deserted for far longer than it has officially been closed.

Seeing as the magical elevator ride that was Storyeum tanked big time, what then is the most logical way to facilitate a publicly owned underground space the size of 6 NHL rinks in the heart of Canada’s poorest postal code? No, no, don’t start thinking that’s going to happen… I hear the homeless shelter business produces little returns. Besides, the City would much rather have the addicts and whores living on the street, not under it. Do you know how tough it would be to get paddywagons up and down that glass elevator shaft? The fruit in the Okanogan doesn’t pick itself, people. Well then, that really leaves only one sensible choice, and I’m happy the government is finally fulfilling the wants and needs of the people. Hello twenty-four hour fitness centre! Come to Momma! I don’t know about you, but when I’m at the gym at 3:30am, I look to my few hundred exercise buddies who have also decided to be there at this totally normal time to work out, and I say, “doesn’t it feel good to have a roof over our heads? Mud on my running shoes is icky.”

So Antonio, if you’re reading this, I still remember that fateful night on the east slopes of Torino where you told me that my eyes sparkled like the waters of the village from whence you came. I’ve never forgotten our promise to reunite under the bridge near Ostelli della Ragu and be together once more. I’m coming back for you baby, and my body’s going to be toned like Provolone.

The Ocean by Alan Hindle

Shit on Car by David Look