Beat Kids: Not On My Ball 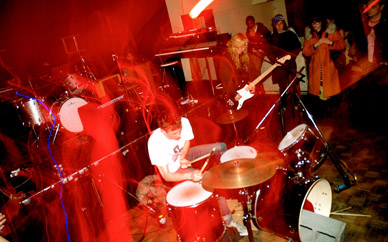 I finally decided there was enough motivation in these old bones of mine to pump another one of these things out. If you read this at all, you may have been shocked last week that I didn’t write. The only explanation I can provide is that, although I had a great week, I just couldn’t bring myself to terms with writing about the same people and the same events that bring a stale and redundant feel to this city of ours. This Saturday night before I went out, my mind kept going back to the dreaded thought of writing my column again for today. Thoughts of somehow explaining yet another night at the Emergency Room, Friendship, or whatever else went on were flying through my uninspired brain; I considered amputating a finger so I would never be able to type again, but cut off my hair instead.

151 was well decorated on Saturday, and BCVO were pretty OK, but maybe I wasn’t on enough heroin to really enjoy their set. Unfortunately, staying for this low-key set left me walking into the Emergency Room at the peak of the most insane show I have ever seen. Some Israeli band named Monotonix were playing, and it was total chaos. I’ve been attending the ER for countless months and I have never seen this kind of madness. To be honest, I don’t think I’ve ever seen anything like this in Vancouver. The drummer kept moving his drum set further and further into the crowd, and for the last two songs was being lifted into the air by at least ten people, sitting on his bass drum and throwing ceiling tiles while he played the snare and the cymbal, which people were also holding up. If that sounds awesome the lead singer and many a member of the crowd were stage diving, crowd surfing, throwing each other, flailing and falling everywhere. It was nuts and the music wasn’t even that great either. After the set I think people found it hard to deal with the oldies dance-pop – I know I headed out to listen to some Sabbath.

Saturday seems to be the name of the game, seeing as last Saturday I had a raging time at the Peanut Gallery. Nic from Shearing Pinx did some moonlighting with Nu Sensae, shedding some mad guitar licks over the usual drum and bass two-piece. They even played my favorite song, “Hydrogen Jukebox”. If you were too lame to show before 1am you probably missed it though. Next up were Defektors doing the whole ‘next Pink Floyd in a good way’ thing, and some really awesome kids (myself included) started a mosh pit so that people would at least get their heads bobbing. After the set, some fresh-out-of-the-womb DJs rocked the party right while learning how to use Traktor (our photographer included). I managed to escape pretty early to go home and stare at the ceiling because I had a job back then.

There is hardly anything thing going on this week but, Color Magazine are having their fifth anniversary party at the Bourbon on Thursday night. Petroleum By-Products are playing Half Alive on Friday, and there’s also that Crayon Party thrown by Ruffles at 870 East Cordova, and the Twin Crystals tour launch at the Emergency Room. If you can’t make it out to the New York Dolls at the Commodore, then Chow Nasty and Better Friends than Lovers and Bad Moves hit the Astoria Saturday. If Saturday doesn’t fair you well try your hand at Dance or Die Sunday night at Pub 340.