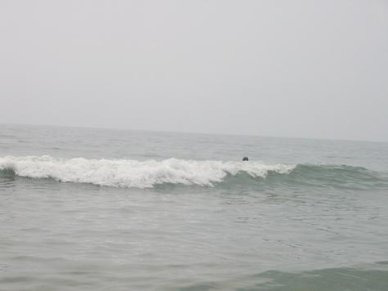 The Ocean is a big pile of water. A couple fish still live there, boats stitch back and forth between piles of rocks called Land, and every night The Sun crawls under its wavy blue blanket and goes to sleep. It’s been around for yonks and, along with The Sun, is the source of all Life on Earth.

In Vancouver it’s a pretty feature adding value to real estate. “Look hard to your right, just between those two giant condominiums, see that splash of saline? That’s your million-dollar view!”

Once upon a time Hippies lived on the beaches, hiding in shells or under rocks, awaiting wandering crabs getting tangled in their beards to be munched on. They lived in sandcastles, combing for meaningful driftwood and rocks to braid in their hair, pointing out to each other the various features of Middle Earth around Spanish Banks. Today they’re all but gone. A few remain at Wreck Beach, naked as the day they sprouted from the trees and soil as all hobbits and dwarves do. Migrant workers from the DTES farm garbage bins for tin cans and pick small change like rare, withered fruits from the palms of sprawling sunworshippers. Mostly, however, the sand is enjoyed by volleyballers, joggers trailing shrunken dogs in matching outfits and accessories (A pooch was spotted the other day wearing a backpack big enough to hold one biscuit. How torturous is that? Running round with a delicious-smelling snack… on your back?) and condo dwellers staring down from the 40th floor between bouts of shoveling money into their roaring mortgages.

Vancouver combines building boom with homelessness, rocketing property values with a decreasing population and a tourism industry with an increasing lack of anything to see or do. There are so many bubbles in Vancouver’s economy the city is like a giant mousse. A fluffy, 67-layer mousse cake on a geological fault line. And it is all The Ocean’s fault.

Tourists and locals gather like pilgrims along an undulating hem to watch hydrogens and oxygens dancing together. Some go whale watching before the Vancouver Aquarium kills them all. Some rollerblade the seawall before it completely collapses into the sea. Funny thing is, the planet is seven-tenths water, so wherever folks are coming from, chances are they have some wetness of their own back home.

Granted, sunsets over English Bay are astonishing. The land is breathtaking. But if anybody ever realises there are astonishing ocean sunsets in a million cheaper places in the world, all that will be left to justify BC Tourism’s Greatest Place on Earth! bumper stickers will be melted mountains, half a dozen excellent hotdog stands and a listing in the Guinness Book of Records for World’s Tallest Mousse Cake. The 67th tier of which will cost ten million dollars, boasting an incredible view of Mordor and a rising pile of water.

Shit on Car by David Look