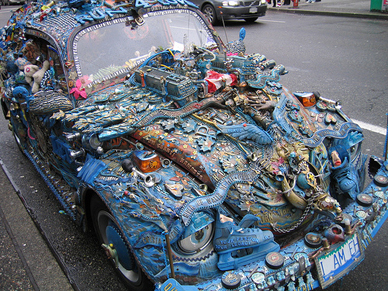 The pathetic nature of this unofficial Vancouver tourist attraction that’s often parked outside our office is twofold. First, we have its creator, who has seemingly devoted his life to gluing garbage on a car that was once a shining example of German design and ingenuity. It’s on par with the taboo of painting an elephant and parading the poor thing up and down the street for the mockery and ridicule of others. I’m often overwhelmed with a fantasy that involves me speeding that sweet little bug to a complete restoration at some kind of sanctuary for traumatized cars while the lunatic that owns it shakes his fist in the rear view mirror.

Then we have the twits that think this kind of thing is wonderful. Usually they inhabit the forest of hotels that surround our office, living space, and extensive collection of television sets. Countless times I’ve had to dodge their retarded behavior on my way to the liquor store during commercial breaks in Lost. They pose, they flash the piece sign, have a family moment and marvel at the garden fountain that spits water out of the manifold the guy that owns it got from Home Depot. If you’re getting swept up in the romanticism of it all, try witnessing it every weekend. Especially when you’re on the way to the liquor store, especially during a commercial break in Lost.

Our message to the owner of the Beetle that parks outside of our office and extensive collection of television sets: please, let the Beetle be free and stop devoting your weekends to sitting on the patio at Starbucks basking in the attention of people in the blissful state of a holiday who don’t know any better, and are starved for something even remotely interesting.