Tourism Week at Only Magazine 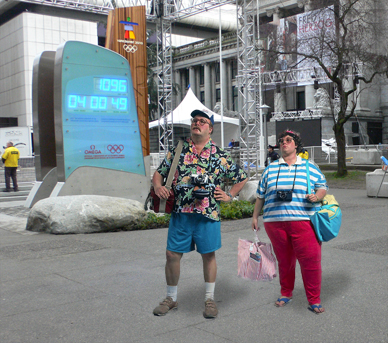 What in the hell do tourists do in this city? There’s Stanley Park and Granville Island and… the Suspension Bridge. Really? Is that really why every year at around this time (or maybe a month or two from now. Whatever. It’s nice outside, it feels like tourist season) a bunch of camera clad idiots with zip-off pant-shorts — wide eyed with smoked salmon and totem pole lust — flock to this city like it’s the god damn Graceland of natural beauty? Truthfully, we have no idea why non-hikers tourist this city, and we really want to figure it out. That’s why we’re devoting this entire week at Only Magazine to Vancouver Tourism. There’ll be all of the regularly scheduled crap too, don’t worry, but we’ll also be exploring fascinating subjects like our least favourite tourist attractions, least favourite things about tourists, least favourite things about Vancouver in general (nothing new there), and maybe, just maybe, we’ll find something nice to say too. So break out the Indian candy and settle in with a bottle of your most special ice wine. It’s tourist season.