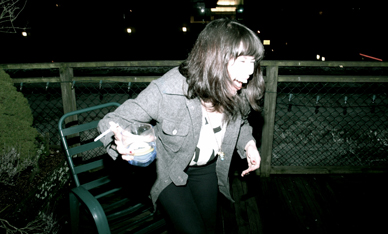 I finally joined the working world this week, and with my new found sense of responsibility I decided to send my favorite Facebook Application, Lil’ Lohan, out on the town for me. She’s a total cunt.

Tuesday Lil Lohan went to Friendship at the Astoria. She was almost rumored to be ‘seriously dating’ somebody after being spotted together in the men’s room, but phew, thankfully she dodged that bullet. That would have been career suicide. That night really landed her on the hangover couch though. She suddenly found herself believing that staying in for a night was a good plan. This, as it is most times, was a good decision, as the last Makeout was reportedly ‘forgettable’ either from all the free kegs, or lack there of. Thursday night she wanted to hook up with Switch, but due to her director inviting her over for Lost and a photographer mixing the drinks a little strong, she took her limo home to get up for a casting call early the next morning.

Friday night, fashionably late just didn’t look too good on Lohan as she missed the Dead Ghosts set at the Astoria. She immediately headed next door to the ER for the Pyramid Power release. To her surprise the rented out room was filled with a different crowd; Cam Dales and Dani Brown were laptop DJing and from everywhere she heard the cries of the angry ‘staff’ of the normal nights. They had been hassled hard. The magazine itself, as always, was really nice to look at, but the Granville Island Brewery does not belong in the Emergency Room. Lohan, however, doesn’t care about either, she was only waiting for the regulars to show up. Then there was Rory Them Finest who was heard saying “I see you every time I’m in Vancouver…” in a not so inviting way. Speaking of uninviting, Paris Hilton arrived with Kimberly Stewart and made a big scene while trying to claim she was avoiding one… Goodness those Hollywood feuds, fueled by photographs, websites and parties.

The next night was no better. It seems that SalBourg has jumped on yet another band-wagon; Jesse Taylor‘s name was on the flyer, but three songs does not a set make. The party started at one, but Lohan was early chain smoking Parliaments in the back room, being there for the sole purpose of keeping that fashionable alcohol bracelet on and that little nose clean. This might have made it easier for her to leave before the crowds flocked, or it may have been those seizure causing laser lights. Either way she should be glad she did, because the next morning tabloids were reporting the exploits of Kim and Paris getting a little too tipsy and going on a Lo-hunt. Lilo would not have been prepared for that kind of hazardous fun.

V-Day Terror Bird (that lovebird band) will be preforming at Blastramp, Expandable Youth will be at Republic, Sex Attack will be at the Modern, and Trevor Risk will somehow manage to be at both. Lindsay’s‘s trying to play it safe lately, but seeing as she’s not currently attached you might see her pulling some New Year’s action. Friday Japandroids, FSRZ and The Clips will be hanging at the Biltmore, Wintermitts, Organ Trail and James Lamb will be at Cafe Du Soliel, and Better than Loneliness will be in full birthday action at the Astoria. Saturday Laura Piasta is having a showing at Blanket from 6-9, Ghost House, Johnny Wakeham and The Navy Black are at the Astoria after that Say Hi is at the Unicorn. He’s all the talk in LA.