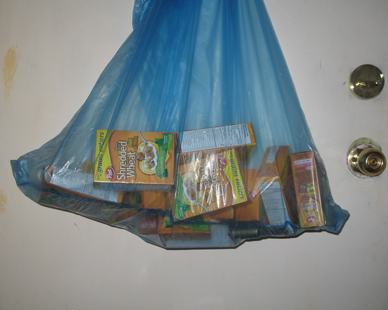 Hastings Street is the promised land for the bargain shopper. You can get everything from the obvious, like sex and drugs, to household items, food items, electronics, clothing… you name it and it’ll probably turn up. And when it does you’ll be sure to get the sweetest bloody deal.

Because I am one of the lucky few who get to call this 24 hour carnival of poverty and desperation home, I have round the clock access to all the bargains. Lucky me. So fuck you Costco, I bought my breakfast today from a crackhead (this isn’t a term I’m throwing in for dramatic effect, the man had a crack pipe dangling out of his pocket and halfway down his leg).

The purchase: 20 or so portion sized packages of shredded wheat (the kind of individual cereal packs I used to lose my mind over as a kid). In the mirage of my morning hunger it was like I had just received a gift from god. “Like” is the emphasis there, because really his name was Dave and he didn’t look much like a messiah.

When shopping on skid row there are a couple of important tactics I’ve discovered to make the transaction go smoothly. First of all, it’s always best to stay pathologically calm. There are numerous reasons for this, but often it’s because you have to balance out the merchant’s erratic behavior. Second, check the shit out carefully. You don’t want anything with even hints of being used, opened, soiled or wet. In some cases we could be talking life or death, like in the case of the homemade jarred chili a friend was almost sold a few weeks ago. Third thing to determine is how much this crap is worth to you. Take my case for instance. I wouldn’t have picked out this type of cereal at a store, I definitely wouldn’t have wanted that many boxes of it, and I sure as hell didn’t want to store or carry that big bag back home… so I offered him $3. When he freaked out at my offer I just shrugged and told him the reasons. This may sound totally pathological, but I was just being honest. I wasn’t looking for this shit, it just happened to find me… and that’s the key to this game. Honesty. I did admit to him that I have a fondness for these individually packaged boxes, and for that I’d throw in an extra $1. Deal.

Before you make a deal, you always want to know what kind of currency you have on you. I knew I had two toonies, and could either lose the deal for low balling him, or make him feel like a winner because I threw in an extra buck. Asking for change down here is not something you want to do, mostly because you don’t want the money these people have handled, and if they don’t have change, then you have to hang out with them long enough to get it. Either way it’s not worth it.

The last thing to remember is to keep the money transaction quick and out of the spotlight. These guys are usually sketchy and need to move on to the next hustle, so to make life easier for both of you; just be quick and calm. Once negotiated, my transaction didn’t take more than 15 seconds… Success… except for feeling like a douche bag as I walked home with a garbage bag full of shredded wheat.