Beat Kids: The Tables Have Turned 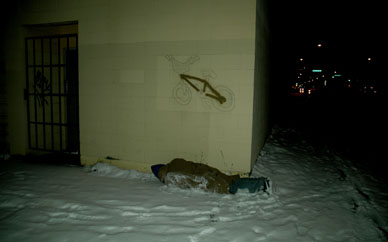 We Are Wolves played Pat’s Pub Tuesday night, with Terror Bird as their openers. This show was packed with all those kids you see at the clubs, mostly the ones who don’t know conversation outside of ‘who are you with?’ or ‘where did you buy that?’. Although the crowd was shallow, Terror Bird lulled me with their Bowie-esque korg and synth splendor. Then We Are Wolves pulled out every trendy trick in the book (triangles, wolves, Montreal), which felt very out of place in one of my favorite venues. From what I saw of their set (before my ear-drums started bleeding) I got the impression that they really expected to play the Commodore but needed to make a quick buck so they booked a cheaper place to play the show. Strobe lights? Where the fuck am I?

My favorite part about this dated dance-pop act (three years is a long time you know) were the cardboard cut-outs of skulls floating above their heads (read: attached to plywood which was shoved down the back of their shirts). The whole thing was reminiscent of some guy going through a mid-life crisis, and revving his red sports car to make up for the fact that he can’t get it up. I’m still wondering how they managed to drug everybody into a stupor of actually enjoying the set, even to the point of some girls painting their faces white and flocking to the stage. Gimmicks are the name of the game, apparently.

Nu Sensae get honorable mention for their set with Cheerleader Camp at Pub 340 on Thursday, which is probably worth more than the bus change they made off that show.

Saturday night I got duped into going to that We Heart Daft Punk party at the new Biltmore. I say duped because these DJ nights are fun and all, but like anything of that nature, are pretty pointless, uncreative and repetitive. Let’s be honest here, M!G!H! isn’t the best DJ and having a third Daft Punk party only goes to show that it takes three times to get those mixes right. They’ve got their thing down I guess, and the door girl sure knows how to make you feel welcome… Lindsay’s Diet is doing alright for themselves too. For their photo-booth they had Chris Bunz paint the Daft Punk guys onto a piece of plywood with head-holes and all. I think it fell over once or twice though. Anyone injured?

Wednesday night marks the end of an era… kinda. (Update from the comments section: The Makeout are not moving to the Lamplighter. They are officially venue-less.)… Go drink their free beer at their final night at the Unicorn, then go to Fake Jazz at the Cobalt. Thursday Switch come to Republic and Ghost House, Ford Pier and Copilots play the Media Club. No Gold, Dead Ghosts, Defektors and Thomas Cunningham IV hit the Astoria Friday night, and that same night the ER is hosting the Pyramid Power release which shouldn’t be something to miss. Just down the alley from that at the Secret Space Chris-A-Riffic, Ora Cogan, Nut Brown and T.V. Coahran will be playing, and there’s that Sex Attack! thing that’s on our website. Rave = passe.