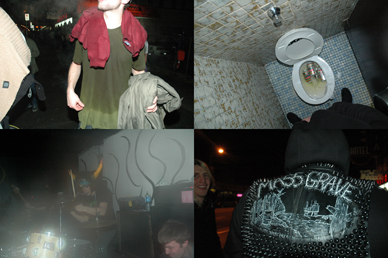 Hey, did any of you guys get that nasty bug going around? You know, the one where you can’t move, eat, think or breathe for like a day or two? I guess I drew the short straw on that, but I must say, painkillers and bed rest have never been better.

Jaws, Ladyhawk and Bison played a show together on Saturday at the venue of birthdays, the Astoria. The lineup was great, and the line outside went around the block, with people waiting way longer than they normally would for a DTES show. I don’t think anyone was too mad about it. Jaws played a heavy set of their mosh-able metaltunes. Andrew, the front-man, was shirtless as usual and jumping in and out of the circle-pit. It was killer, and if I hadn’t been wearing a dress I would have jumped in too.

Ladyhawk was up next – just to let you in on a little secret, I really love this band. Listening to any song off their last album makes me reminisce about my travels across Canada. It was a two week trip on a rail-train built in the 1930s called The American Orient Express, on its last trip ever in this country. I guess you can say it holds a lot of memories of my first trip away from Vancouver alone, but I think that anyone who has listened heavily to that album will have a similar nostalgic story.

Unfortunately, seeing them play Saturday kind of made me feel a little betrayed – the kind of feeling you get when you find out the man you’ve always called daddy isn’t really him, and is in fact a wanted serial killer in Morroco and seven other countries… Yes I know that sounds a bit melodramatic, but that’s how it goes. Standing somewhat near the stage, being pushed by weird girls screaming out “I love you guys!” in the I-wanna-suck-your-cock-and-be-your-Almost-Famous-groupie sense of the term. Add to that some bouncer from the Cambie in his motorcycle jacket knocking my beer straight out of my hand (no fatalities) and the fact that the single from their new album sounds exactly like their old songs, but with a pop-ier Pride Tiger punch (woo-hoo…). To be quite frank I just couldn’t stand the travesty and fled (read: grabbed the two-six I stashed at my friends house across the street and went and got my photo taken at the Lindsay’s Diet thing), unfortunately missing a supreme Bison set.

On a side note, there’s a girl who has been working her butt off, doing way too much good work booking the Astoria, and her name is MJ. She’s set up all those fun things you love to go to there and doesn’t even get paid for it! Well, free beer’s a plus I guess, but major props. Keep it up, Vancouver thanks you.

Wednesday there’s an all ages show that Ruiner, Broadway Calls and Jaws are playing at La Casa Del Artista (150 E. 3rd). Thursday is Heavy Blow II at the Bourbon, the same night The Jokers of The Scene are hitting Republic, and Friday is Better than Loneliness at the Astoria. The Teenages from the UK are also playing Half Alive that evening. Saturday go to the Astoria for B-Lines, Stuffed Animals, Stamina Mantis and Nu Sensae, OR go around the corner to The Chapel on Dunlevy to see Tranzmittor, Petroleum By-Products and The Manipulators; both show will be awesome you should clone yourself for one night. Oh yeah and Sunday ReadySteadyGo! has it’s first night of many at Pub 340. Justin of Mutators/Emergency Room fame will be spinning REAL records, and good songs – you know, the ones you love to drink $3 Vodka Redbulls too.