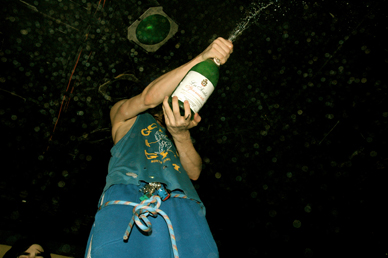 Hope you all had a great Christmas vacation. I enjoyed my two weeks I said I wasn’t going to write about, and I hope you enjoyed your two weeks of not having to listen to me bitch!

The return of Basketball at Pub 340 right before Christmas was leaps and bounds better with the new tribal drum setup. These guys really know how to dress up and bounce around stage, and the firecracker pyrotechnics were pretty gutsy too. This show also hosted by far the best Twin Crystals set I’ve ever seen. I was too sick to stick around for Mutators, but I heard it was not the set to miss:(. Some jerk stole their duffel bag of pedals, so bad karma is currently being doled out to whoever pulled that one.

The Bourbon had a Trapped in the Closet night the day after Boxing Day. I decided I couldn’t miss this guilty pleasure, and boy am I glad I didn’t. I walked into the washroom and discovered the two greatest girls I’ve ever not-met in my life. One’s fixing her side ponytail scrunchy in the mirror and checkin’ on her grillz (the real kind, kids) while the other walks out, having just loudly plowed a rail, picks some lipstick off her teeth and says, “this guy has no idea how to fucking beat match!” I’m pretty sure they became my idols as they were sitting on the banister to the stairs throwing ice at people. Thank you guys for being authentic LA coke heads.

The Gypsies and Tramps definitely Thieved (pun!) Shine of its guests on New Year’s. There was yet another mob outside the Balmorlal before midnight, but crowd control (AndrewThrice) fixed that one, screaming order. I have to say this party was an amazing way to end the year. 600-700 people showed up, and some chick’s big boobs popped out. They had the ER kids in the smoke room spinning records and rave-rap crowd pleaser DJ’s on the big stage. All I can say about this party is that my shoes were clean when I walked in and caked with blood, sweat and dance-tears on the way out to the ER after-party. The Emergency Room has really changed since I first went in the beginning of spring.

Pub 340 is still alive, and man everyone came out to celebrate it this past Friday. Defektors, Motorama, Sugar Coated Killers, Rio Bent and Vapid played, alongside those now infamous ER DJ’s Jesse and Justin. Sugar Coated killers played a good set and I saw some kid cutting lines in the smoke room. This party rocked… I think?