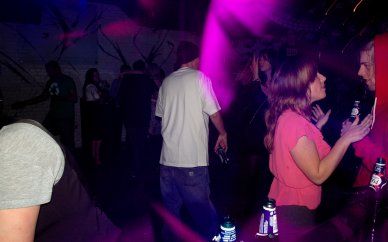 This weekend, the Vancouver Sun (yes I do occasionally read a newspaper) decided to put a nail in the coffin of our already dying “Hip Scene”. They named off pretty much every place with a jukebox and a crack head. Anyone else as excited as I am for the new crew of losers showing up? Reading this article lead to a trip to McDicks and an 8 pack. Hope you enjoy it too.

Tuesday night Friendship was actually really good, minus the fact that it was a welcome home party for an infamous mean girl. Not a single bad song, but this night was the inspiration for the article, so beware. This week’s the Christmas party…

Dropped by Hoko’s on Thursday to see the amazing Katie GoGo. Her voice is divine, but Trike… I have never wanted to escape seeing a band so much. I was driven to the point of climbing a barbed wire fence (just joking… not really). Put that $2,000 you won on that Gong Show to use…

Twin Crystals and Glass Candy rocked Richard’s on Friday, and now every “urban warrior” in town will be wearing a shirt and listening to Beat Box. Glass Candy played their amazing dance-disco synth songs for a bit over an hour. They nailed shit off Iko and Beat Box, and I loved it so much I abandoned my merch duties for Sugar and Whitebread to terrorize the dance floor shouting out the lyrics. Working for the above bands was possibly the most fun I’ve ever had — Johnny Jewel and Ida were amazingly nice. The downside was missing Hallmark, Petroleum by Products and Ladies Night at the Unicorn.

You know what’s better than anything? A Guitar Hero party. What’s even better than a Guitar Hero party? A new art venue! It’s at 223 Main Street across from the cop shop, but don’t worry, it’ll be licensed… soon. The gallery will be called KnowWhere and will also host a tattoo studio (run by Casey from Fun House Tattoos), and be a Guitar Hero jam spot! The Shantz Brothers showed work there on Saturday, unfortunately I was unable to attend. Instead, some of us crashed our editor’s apartment party, broke several crystal glasses and sipped Siberian Moonshine. And plum brandy. This resulted in only catching Certain Breeds at the Astoria, which was enjoyable, and then hoping back into the cab instead of crossing the street to see They Shoot Horses. God, I love downtown apartments.

Shama Gorath rocked the Colbalt for their second show last night, and some other band called The Flanuers played… glam rock? it sounded more like Greenday in good outfits. Back to Shama Gorath. This was their second show, but I was extremely impressed with their catchy surf rock beats, a song about Bob Ross and a cover of the Batman theme. GET THESE KIDS SOME SHOWS. They will be gold within a year (when they get more comfortable on stage).

This week is your last chance to shop before the big day… I should really get on that gift giving, I’ve been too much of a Grinch this year. Scottie B is hitting up the Modern (boooo) with Paul Devro for a Baltimore booty shake this Thursday night, and fuck, I wanna go. Better than Loneliness is having a birthday party on Fridaywith Danny Does It (who would probably kick my ass if I didn’t mention him here) and Sex Attack is playing Half Alive, which I personally think is Gay Husband‘s idea of a cruel joke. Oh yeah, and The Stills are playing that dreaded place the Biltmore. Calgary, your suck!