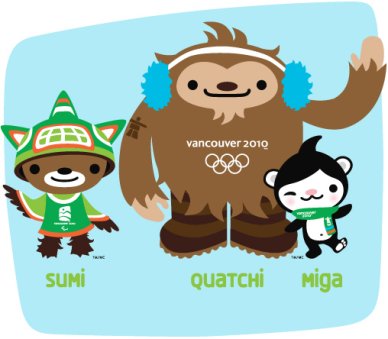 When we caught our first glimpse of the just unveiled 2010 Olympic mascots a few hours ago, ‘unimpressed’ was probably the first word that sprang to mind. Then came ‘horrible’, then ‘fuck’, and then we all started farting in unison. For the first time ever, we agree with the rest of Vancouver – a parade of spirit bears would have been a far better choice than these abominations. We’re all for trying to attract more ESL students, but this Pokemon shit is so ten years ago. And is Quatchi actually wearing Ugg boots and rocking a tribal tattoo?! Where’s his yoga mat?

Here’s the thing: We’re of the group of people that thinks using native symbols/icons is blatant pandering and unrepresentative of BC. In fact, we find it kind of offensive. Maybe we’re just soft, but the idea of taking someone’s land, destroying their culture and then paying respect to what may remain of it by using it as a promotional tool for a sporting event is ridiculous.

Luckily, we aren’t alone. If you check the comments section of this Vancouver Sun article you’ll see what we’re talking about. User’s comments range from “Pretty terrible,” to “These are the stupidest-looking things I’ve ever seen!” to “You’ve got to be kidding me,” to “It looks like a drunken sasquatch with earmuffs,” to “Now I’m convinced we really are culturally challenged!” to “I can’t believe how embarrassing this is…”