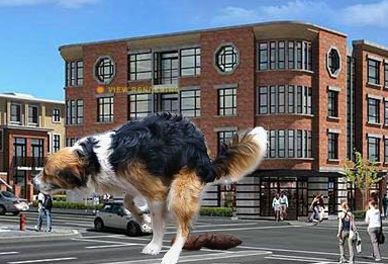 In response to yesterday’s Credit Check, we received an email from one of the heroes over at Antisocial. He was quite disgusted to find out that a photo of Antisocial was floating around on the DoMain website, being used to exemplify the hipness that is Main St. He wrote the Hippest Condo Ever fucks a letter asking for the photo to be removed from their website, and since the letter sums up everything we feel about the sad future of Main St. better than we ever could, here it is:

I’m writing on behalf of the Antisocial Skateboard Shop located at 2425 Main St. in Vancouver. We’ve noticed a picture (the one with the pink motorcycle) of the interior of our store on your fancy website: www.domainliving.ca and we’d like to request you remove it immediately. I’m unsure how the other businesses displayed on your site feel about this, but please take ours down. It makes us feel weird, sort of sticky like the floor of a movie theater. The use of the image gives the impression that we endorse or somehow are a part of the “The Hippest Condo Ever”‘s arrival in our neighborhood. This definitely isn’t the case. In fact, it’s developments like yours that will inevitably drive our rent up even further and force us out of the very neighborhood you are so keen on exploiting. To be honest, we think Main St. is going to look a lot like Yaletown or Kitsilano once you get through with it, so maybe you could just take some images from there and use those instead? How about some pictures of a high-end dog spa? Or some laser teeth whitening clinics? Just an idea. Did you know we’re also an art gallery? Because Yaletown used to have some pretty interesting art galleries. Up until when they were driven out by skyrocketing rents and rabid packs of small, designer dogs. Anyway, don’t worry, soon we’ll be gone, forced east probably, off to some even ‘hipper’, more ‘funky’ and ‘diverse’ neighborhood, one you don’t yet know about, but fear not, we’ll let you know where it is when we get there so you can come ruin that one too. Until then.

If they ever respond, we’ll throw that up here too…