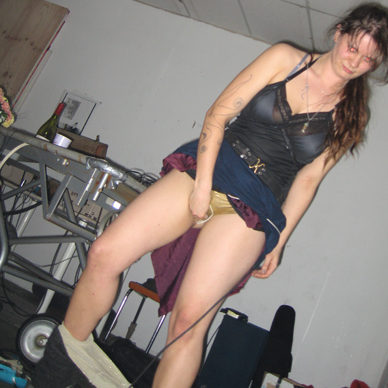 It’s great having a night without DJs once a week. Since you can’t poke Granville with a seventy foot pole even if you wanna check out Expandable Youth :( Fridays always end up being a free-for-all of house parties, noise shows, art shows and dive bars; but that’s how Friday’s should be, right? Spend your night at some gypsy-noise show at the Secret Space, and then find out you’ve completely been in the other room for a whole set of some chick sticking a cord up her vaj.

I love seeing new venues appear in this city. With all the closures, we need some new places to party. Franks of Franklin has a lot of potential. Throwing those “once-a-month” dance parties ‘til all hours of the morning is fun, but maybe get some real thirteen-year-old gymnasts to run your door/put out my cigarettes next time? Apparently this “once-a-month” thing is happening every two weeks now, so let’s hope Sex Attack discover ecstasy by then. It might help their music/outfit choices.

So yeah, this Friday come down to the Gaff Gallery early and see our All the Covers show, and drop by the Astoria for the after party with Adelaide, No Gold and Petroleum By-Products. Even after doing all that you’ll probably be able to catch Steve Aoki at Celebrities if you’re real eager. Saturday go to Richard’s for Destroyer and Pink Mountaintops… Just go. And after that, go to the Dance or Die! party at the Emergency Room (blates) for Adjective, the Defektors and APVH.

Hard to believe that the month of Halloween just ended a week ago; the Unicorn held the premiere of the skate video Suppers Ready; Ryan McGuigan‘s newest creation featuring Mitch Charron, Nathan Evans, Mike McDermott and others (I’m really into misusing semi-colons these days). It’s probably the best video to come out of this city in a while. I mean, they got everyone to show up by 10 at least! I totally got dragged out at twelve by my friend who was super wasted, but hey, it’s not like I missed much other than a room full of American Apparel body-suits anyways. If you end up showing up to the Rock & Roll Party at the Makeout this week, I advise that you invest a good $2 in the best slice of Mac & Cheese you will ever taste at Blue Sky Grocery. I think that they may sell some illegal cigs too if you spent all your money on other illegal substances.

Tuesdays I hit the 7-11 under the Railway. It’s just not Tuesday without a taquito (and Shindig). After some well needed munchies I hit the Astoria for the Friendship party; first week was awesome, last week not so much, but seriously, lets do it again!