50 Readings in One Day 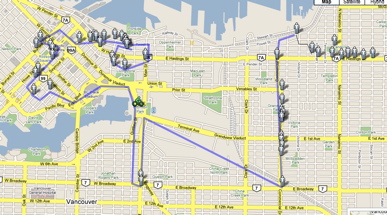 Streaking across the city, his powerful legs pumping like pistons at the pedals, swerving through screeching traffic and heaving his bike into soaring leaps over hapless animals attempting to cross the road – including mice, squirrels, cats and seriously lost elephants – because he can’t bear the thought of harming a living thing, is Kevin Spenst. What’s the hurry? Is he escaping enemy agents, or avoiding an imminent, catastrophic meteor? No. The man is on a reading tour. 50 readings around Vancouver with a film crew hot on his tail, Spenst is going to make two score and ten appearances around this city reading from his book, “Fast Fictions”, all in one day (Saturday, September 29).

“It was a difficult, uphill battle to pitch doing readings at some of these places,” says Spenst. “Here I am, some guy, at a hair salon on Hastings. People are just sitting there getting their hair done and I’m asking this glaring woman who runs the place if I can do a reading there. ‘How much?’ she says. No, no, no, it’s free, I just want to read from my book here. And she’s looking at me, thinking, ‘I don’t know what you are saying, but you are insane.’

“Then I’m on my bike and I’m down to this pizza place, thinking, how do I pitch this thing that’s completely out of most people’s realm? I ask the guy there, and he’s like, ‘Yeah, we’ve had readings here.’ ‘You have?’ ‘Yeah, this guy read my fortune. I didn’t like it.’ And the he gives me this… look… and I realise I don’t know if this guy even works here, or if he’s killed the owner and there’s a body in the back… So I back out very slowly…”

Each reading is expected to be no more than five minutes, and the itinerary often allows only five minutes to make the next appointment. Think of it as The Neverending Story meets Run Lola, Run.

Spenst describes his stories as sometimes funny monologues, sometimes fairy tales or family dramas, or Kafkaesque dreams, all veering between surrealism and magic realism. Every last Tuesday of the month, Spenst has been holding “Finnegan’s Wake” nights at Taff’s CafÃ©, reading and discussing chapters from the densest of James Joyce’s often Byzantine works with whoever turns up. That same love of language and wildly roaming ruminations infuses Spenst’s brief stories, which he writes at a rate of one a day, often illustrating them with wandering doodles.

Catch him if you can (here’s the map, scheduled times are given here) or grab your bike and join the frantic literary crawl about Vancouver, listening to glimpses of a nimble mind. Maybe you’ll be part of the equally frantic film that promises to come out of this.