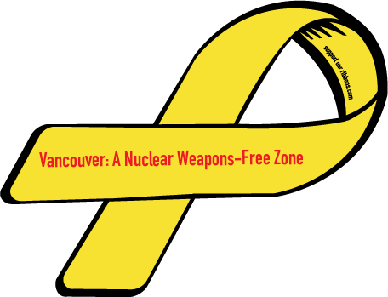 In the last days of his regime, Chief Constable Jamie Graham announced a new programme to paste “Support Our Troops” stickers on the back of police cars.

Graham says “Support Our Troops” doesn’t mean support of the Canadian mission in Afghanistan like everyone thinks. He says it refers solely to the individuals who volunteer to be in the service.

But this raises the question: if it’s not Afghanistan, why else do “our troops” need supporting? They aren’t getting killed somewhere else. Do the troops still need supporting if they are getting drunk off their arse in a peeler bar in Petawawa?

A much better slogan would be the one that is on all major streets leading into Vancouver: Vancouver:A Nuclear Weapons-Free Zone

Unlike “support our troops”, which was declared by the fiat of an outgoing, unloved Chief, “Vancouver: A Nuclear Weapons Free-Zone” has stood the test of fickle politics. It was debated and passed by City Council. Both NPA and COPE politicians have endorsed it. It has been up on the lamp standards for nearly 25 years. Who doesn’t love it?

You too can act like the Chief of a major city police force! Make your own politically-questionable ribbons like the one above here.