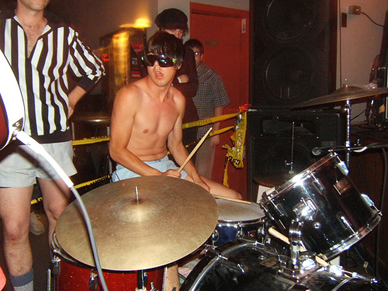 We at Only have a tendency to mourn the loss of any legitimate venue in Vancouver, no matter how shitty they may be. Right now, it’s the worst it’s been in a decade. In just the last year we’ve lost two stalwarts of the circuit: the Marine Club and the Piccadilly Pub. Despite their short-comings, of which they had many, it was still sad to see them go. Especially so disgracefully in the case of the Pic, a place that had some of the best shows in Vancouver shouldn’t turn into a shitty all-you-can-eat Indian buffet before finally closing down. It’s like your Dad deciding he’s actually a woman on his death bed. You have to sit there comforting your mother dealing with the pain of your father dying while he lays there in her eyeshadow.

We are fortunate enough to have some upstarts fill the gap with DL venues like the Sweatshop, Emergency Room, and the Secret Space. Or galleries like Little Mountain and Blim hosting live shows. We even have people packing into Hoko’s fucking Sushi & Karaoke every week to see music. But today came the announcement that the Lamplighter Pub and Dominion Hotel have come under new management and will officially close it’s doors on September 1st for an undisclosed amount of time. This closure makes it an unprecedented three dead venues in one year.

In the past, we’ve given the Lamplighter some shit, but today we respectfully have to mourn their closure.