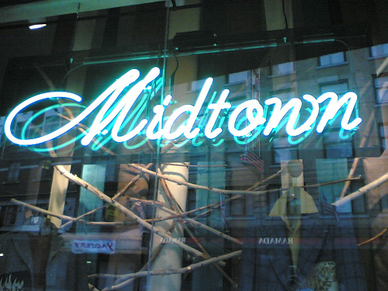 After two years of operation, Midtown Gallery and Clothing will be closing its doors this month. Though our city has more whatever-slash-galleries than sushi joints, the loss of this slash-gallery is a sad one. Operators Sarah Graves and Michael Doehle have worked tirelessly for these few years, making no money, hosting and nurturing Vancouver’s art scene. They took in both established and emerging artists for solo and group shows alike and you always knew their shows would be a party. Midtown is Vancouver art, untrained and unpretentious.

I was fortunate enough to collaborate with Michael on their very first show. We made a 5-by-25 foot stencil and paste up psychedelic jungle scene. We were up all night stressing out trying to install and had some goof show up and laugh at us saying we wouldn’t finish by opening. Little did he know that some friends would show up hours later with drugs to help get the job done. It did smell of paint during the show, but still, fuck that guy. It was only going to get easier after that, and it did.

After they gained control of the basement at 438 West Pender, where Seamrippers once lived, it turned into a little clubhouse for local artists. Friends would come down there to skate the ramp, work on a project, graffiti the walls, silkscreen or just hang out and smoke a joint. Midtown let Only use their shop as a green room for the bands playing our Victory Square Block Party and they hosted the after-party for Music Waste in 2006. Thanks for that.

Earlier this year, Midtown opened a second gallery in the place where they used to sleep. They had to move out after the ceiling fell on Michael’s head. Ever the optimists, they converted their bedroom in the back of the shop into another gallery. This is a perfect example of the kind of people they are — they would sacrifice their mental health by moving home* so they could show more art.

They aren’t dropping off though. Midtown has started a silk screening company and will continue their clothing line, Attention: Death, Disorder. We strongly urge you to use their services (call Sarah at 604.682.6441). Midtown’s final gallery showing and party will be this Friday starting at 8 pm.

Only would like to wish the best of luck to Sarah, Michael, and Elizabeth (aka “The Beetle”) in all their future ventures. Thanks for everything.