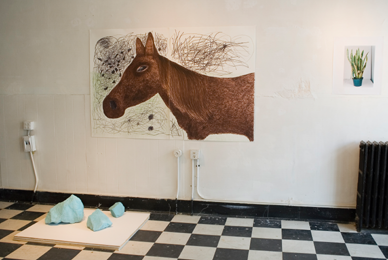 Martin Thacker is a great guy, and we’re not just saying that because he used to write for us. He’s taken flawless slides of basically every artist in Vancouver’s work (often for free). He’s also a good artist in his own right, ambitiously working towards looking at photography in a new way. His new show at the Gaff Gallery is exciting for anyone who cares about photography not getting stuck in an eternal Ryan McGinley/Jeff Wall loop.

ONLY: You studied economics before you studied art. How did you make that switch?

Martin: It wasn’t that well thought out… I was just here in Vancouver and hanging out and I was either going to do a masters in economics or go to arts school. I applied to Emily Carr and got in. I was pretty directionless at that time. I just knew I didn’t want to work in a bank. I’ve always been fascinated with economics; math in general. I think I have a good relation with geometry and balance that comes from linear equations in economics. Photography has mathematics in it as well.

ONLY: But you started at Emily Carr doing painting, right?

M: I only took one painting class and it was with Peter Shuff. He thought I was the worst painter he had ever seen. I was in the class with Charlie Roberts and he was getting all the props. It was kind of discouraging so I ended up getting into photography. I took a photo class. Robert Arndt was the teacher and he got really stoked on what I was doing right away. It was something that he recognised and liked so I spent the next couple years doing that kind of pure photography.

ONLY: Were you inspired by the standard roster of Vancouver photos?

M: Yeah, heavily. I really took to that and tried to make it work with what I was doing. I got into Rodney Graham and tried to get into his practice… Jeff Wall, Stan Douglas.

M: Yeah I take online tutorials on how to do stuff.

ONLY: You also seem to support yourself largely with commercial photographic work, like taking pictures of other people’s art. How has this effected your creative practice?

M: I think it’s influenced me in terms of display, thinking about what a good photograph can do for work, kind of like a promotional image. I think a great photo of a great sculpture can make it look like a great sculpture.

ONLY: One of my favorite parts about your show is the sculptural works. It seems like you made some of the objects with the intention of photographing them. In the postcard for the show there was a photo of a sculpture, but there was no photograph, the actual thing was in the show. Do you think that galleries and photography are similar ways of simply framing art?

ONLY: Your non-photographic works take on a pretty modernist sensibility — showing the paint as paint. Is this instinctual? Do certain painters influence you?

M: I try not to be too conscious of the influence of painters that I like. I try to be as intuitive as possible. I’m trying to channel something from the subconscious. I was aware when I was doing the horse painting that I was dealing with heavy symbolic material, but it was more like a vision of how I was going to do it. I wanted it to be big and brown. For me painting is the best technology for mining the unconscious. It’s so different than photography. With photography you’re walking around, you’re passive, you’re receiving information and stimulus and you’re recording it. I find painting to be antithesis of that. I haven’t used source material as far as subject matter, only for texture.

ONLY: That makes sense. Photography is the relationship with the outside world and painting is the more inner world.

M: There’s only so much you can do with walking around, recording stuff before you want to go back into yourself. After photography, painting seemed to be the next step.

ONLY: I don’t think people are really used to seeing photographs and drawings by the same artist in juxtaposition.

M: I think that practices in Vancouver tend to be distilled. Conceptual art, which is the main art industry in Vancouver, by its nature is so reductive, and not really experimental. I haven’t really seen any shows in Vancouver that look like this.

M: It’s pretty experimental right now. I’m looking at the different technologies and seeing what they can do. It’s about mediation. Collage is a good way of sorting through… I mean pure photography is such an artificial construct it doesn’t necessarily relate to how your brain processes images so collage is good for that. With digital, that’s really something that I started doing in the last month–trying to make digital prints off of a computer. I mean, there’s no real good reason why that aesthetic can’t be good lying next to a handprinted c-print.

ONLY: In photography there is this desire for cohesiveness.

M: It’s trying to make the technology disappear. I want that mediation to be one of my main focuses of the work. I’m not really working with a subject matter; it’s not the first concern, a social critique of anything. The subject will always be there.

ONLY: What is it about contemporary photography that you’re trying to work against?

M: It just seems so stale. The photo shows that I see seem to align themselves with such specific styles. It seems like there are only a few avenues you can take. Being forced to choose whether you’re a snapshot photographer or a large format photographer doing landscape, or ’90s Vice-style, photographing-your-friends-stoned type of photographer… It seems so locked down and your options seem so limited. Forcing you into a style, that’s just so restrictive. I never felt that comfortable with any of those agendas. It wasn’t what I was about.