A Prayer For Owen Plummer 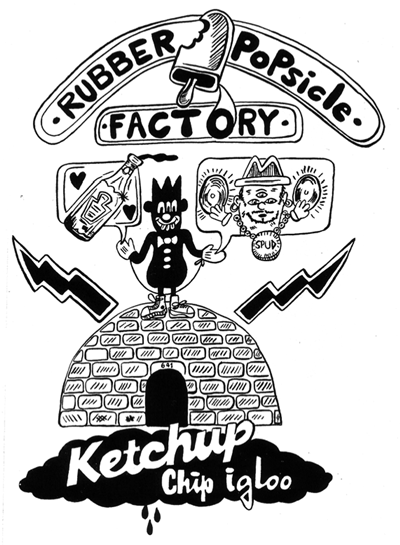 The Next Big Little Thing

“Art books” seem to be cropping up everywhere, spreading like some kind of dirty plague…but a good dirty plague, one that makes you feel like the opposite of what you’d feel like if you were all suffering from some kind of bad ailment. They mollify, edify, enlighten, and educate. They don’t perpetrate, procrastinate, hesitate or get irate. Take a look at the oeuvre of Owen Plummer, who has taken the deification and representation of the image of Mr. T to unparalleled heights in his Rubber Popsicle Factory series of books. (Please tell me you’ve read “A Heartbreaking Work of Staggering Genius” and remember the tale of Mr. T growing up by Dave Eggers’ parents’ house and chopping down all the trees on his estate.) Plummer makes a funkified Mr. T the center of an unpredictable variety of one page drawings, accompanied by floating pyramids, big gold chains, ketchup bottles, lightning bolts, igloos, three eyed friendly beasties, and cameos from the “Kami” fish – the unjustly fired mascot of Kamloops.

Poor Kami, he was a happy cowboy hat wearing trout whose six-shooter was deemed too violent an image for the kiddies of the ‘Loops back in the day, and the city ignominiously retired him in the late eighties without so much as a burial. Owen Plummer’s work will doubtlessly resonate with the Kamloops diaspora, separated from their natural homeland and forced to work abroad in the big cities due to economic hardships brought on by the end of the Cariboo Gold Rush in 1862. His images of Kami wild and free, at times standing in the desert, at other times enjoying a ride in a fine automobile, are enough to bring a tear to one’s eye, and lament with much sorrow the passing of one of British Columbia’s finest town mascots. It’s as though Plummer is consoling us, telling us, “It’s all good, Kami has gone on to a better place.”

Plummer has been a beacon of consistency in the production of the Rubber Popsicle Factory books over the past eight years, and without a doubt has had an influence on the growing proliferation and propagation of small, self-published art books being made in Vancouver. His books are practically begging to be bought (for a dollar or two) and stuffed into your back pocket.

Luke Ramsay’s work shares a similar aesthetic to Plummer’s, and if I was to venture another connection, I would say they both seem to be operating in the general realm of the Jason McLean/Marc Bell school of visual representation. The style they all utilize at times is a type of “story within the picture” visual that creates a unique narrative structure — a large picture that contains within it either separate related images or some broader line within the picture that leads your eye through the internals of a drawn image. Perhaps they are Jungians, “Who looks outside, dreams; who looks inside, awakens.”

Plummer, Ramsay, Marc Bell, and Keith Jones, as the Puffer Group, have worked to together to complete the first four issues of Puffer Extract, a delicious example of what happens when you mix your peanut butter with my chocolate…I mean, when you put four people together who draw in the aforementioned style of the story/joke-in-picture and have them all colliding with one another in the same drawing. These collaborative enterprises can leave you analyzing, guessing, and decoding for as long as you have time to kill.

Art-books are a big little thing in Vancouver, taken up by people who simply like to draw and do it because they can. You can’t stop them. You can’t stop these little books from coming out, so buy them up and spread them all over you floor and let everybody you know roll around and enjoy them.