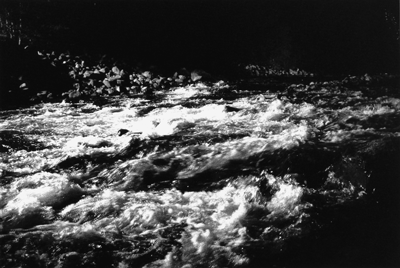 Pacific CinemathÃ¨que (in conjunction with Rodney Graham’s retrospective ‘A Little Thought’ currently on display at the Vancouver Art Gallery) last Thursday, I noticed that my mind kept wandering off. As I sat through three repetitions of the film, I realized that it’s an inevitability on repeat viewings–Graham’s specific instruction is that the film be repeated for a 60-90 minute looping cycle–that the attention of the audience will drift, creating a fertile ground for interpretation of the work as a reading of the film entwines with an activity similar to a passive daydream.

The four-minute, 35mm film is projected continuously for almost an hour, separated by three-minute gaps in which the lights come up, the projectionist rewinds the film, sets up the projector, the lights dim and the film begins once again. The film itself begins with the sound of rushing water against black, leading to the sound of an engine starting as a river becomes illuminated by lights being supplied with power from the generators of the title. Roaring over the sound of the water, the out-of-frame generators create a steady noise that, due to its decibel level drowns out all other noise and initially seems very loud, but becomes a purring sound quite pleasant to the ears. Graham has recorded on film a give and take where we are allowed to see something that would otherwise be invisible sacrificing one sense for another as the naturally occurring sound of the setting is exchanged for that of an internal combustion engine.

Upon initial viewing of the film it appears as if the artist is asserting himself over nature, a kind of macho act using industrial equipment to temporarily affect a twilight natural setting. Made in B.C. in the 80s, and with its explicit reference to nature, Two Generators is in good company with other works by artists who were working in their studios listening to the CBC; artists such as Jeff Wall and Ian Wallace were responding to the eco-political climate present in the province at the time. Given Wallace’s concerns in his own practice, specifically his photo-based works on the Clayoquot Sound protests, it is interesting to note that it was at Wallace’s suggestion that Graham decided to present Two Generators in a cinema as opposed to in a gallery.
Graham has stated that Two Generators stemmed from his envy as an artist of the cinema’s mass appeal over such a huge audience, that the work was made in an attempt to reveal the inadequacies of cinema as a medium and the imperfections resulting in the theatre during projection, hence the duration of the work revealing the work of the projectionist as the film is physically handled and prepared between screenings. In the film itself limitations of the film stock are revealed, as the length is literally the length of one roll of film and the stock’s inability to record the visual information of the river when there is no light.

Testing the limits of not only the film but also that of the projector, Graham asks that the film’s monaural soundtrack be played at full volume further revealing the imperfections of the medium as the steady hum of the generators slowly phases up and down. The work may appear somewhat cynical in its deconstruction of the cinema by revealing its inherent flaws but as an audience member, the artist’s original intentions should be considered in the context of their time, twenty years ago.
Two Generators will be screening at the Pacific Cinematheque every Thursday at 6:00PM until March 3rd. Admission at the door is by donation. (For those of you who missed Sharon Lockhart’s Teatro Amazonas that screened last year as part of the VAG’s pacific rim show, don’t miss the rare opportunity of seeing an artist’s film work on the bigscreen!)