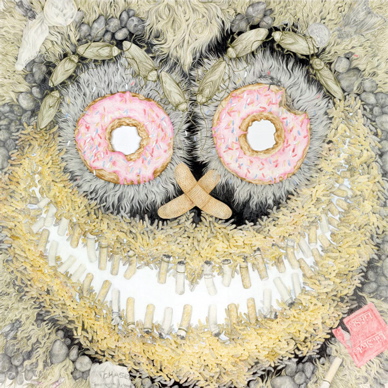 Aurel Schmidt’s painstakingly detailed works on paper recall Dutch still-life/landscapes from the 1600s with a heavy dose of DMT. She recently had her first solo show at Peres Projects in LA and is rumored to have an upcoming show at Deitch Projects in New York next year.

ONLY: The last time I saw you, you had just gotten a pile of William S. Burroughs books from a friend who was leaving town. It made sense for you to be into Burroughs given the nature of your work. Do you ever think about the “Kafka High”? Is your art about feeling like a bug?

Aurel: Those books are good because they slide between reality and you can’t really tell when Burroughs is high or not, what’s paranoid delusion and what’s real. I would say that is a big thing with my work.

ONLY: Your work has a lot of the trappings of landscape and still life paintings that depict a romantic fantasy world. Simultaneously, there is this element of the urban world of cigarettes, garbage and subway cards. Is this you painting yourself into your work?

A: I think it’s definitely personal. I like the idea of common things: my metro card, my bank statement, little things. The last piece that I made was body oriented, with orifices, fluids and tampons. There’s this Theodore Rousseau painting at the Met, a black forest that’s like a tangled void with a little light coming through the forest. My piece its like that: from a distance you can tell it’s a forest, but once you get closer its like all the trees are made of assholes and vaginas, and underneath there’s creatures and garbage and tampons floating around in this murky pool. I once did a face with keys for earrings and coke bags for teeth, this kind of party monster. It’s the vices and the garbage of living in the city.

ONLY: On a shallow level, your work isn’t at all like that of most drawers in the Vancouver art scene. Do you still feel a connection to Vancouver artists?

A: The reason that I started doing the kinds of drawings I’m making now is out of rebellion against the Vancouver drawing scene. I didn’t really doodle very well. I tried a little bit and they were never good or funny. I’m not really interested in comics, and I don’t have a sketchbook. So I started doing hyper-realistic drawings on archival large sheets of paper that were really technical. I’d been drawing since I was a kid so it was an obvious thing to choose. Everyone in Vancouver was drawing, so you could get encouragement for drawing, but if you weren’t drawing that kind of work, you weren’t part of the club. If a drawer in Vancouver has inspired me it would be Stephen Shearer. I think when I was doing my dog drawings I was secretly obsessed with his small face drawings.

ONLY: I’ve never actually seen your work in person. It’s always on the web and most often with supplementary details. How do you feel about that? Are these images that you are supposed to delve into and find moments in, or are you supposed to experience the thing as one single image?

A: I like the idea that from a distance something looks like one thing, but as you get closer you see another. A landscape just looks like a landscape, and the figure a figure, but [I like] the idea that something could be composed of many things and equal another thing. Its like hallucinations: a Cheshire cat smile when it’s there but it’s not. You can’t hold on to any part. With the man painting there’s no part of him that’s really there, its all black space or objects sitting on something. You’re looking at a man, but it’s really just a bag of garbage.

ONLY: Do you draw from photographs? From drawings? Memory?

A: I draw from pictures. I don’t care about photorealism. I find when you’re drawing from the imagination you end up adding all this crap on. You end up adding what you think a bird looks like or what you think a cigarette looks like and it ends up not as interesting. Its like if you were sculpting and you wanted to cast things instead of forming each individual thing on its own. I really like that restraint.

ONLY: I can understand that you’re self-taught in terms of your technique. I’m curious though how you learned what it meant to be an artist?

A: I think what made me decide that I wanted to be an artist was from going to small galleries in Vancouver with my boyfriend at the time. I would go to openings and got an idea of what it meant to show in a gallery or to do a show. I felt like I didn’t know anything, I didn’t know any art history, so I was like “I’m going to study art history.” I started by studying 1920 to present and it took about 8 months. I was very obsessed with learning this information, because I wanted to know what everyone else knew.

It was [the] same as school except for I didn’t have to do critiques. I didn’t have to do the projects I didn’t want to do. I wish I was more well-read because I feel I can’t articulate myself the way I would have been able to if I had gone to school. I didn’t have to write artist statements. Now I feel a little self-conscious about my ability to reference things and know the right words.