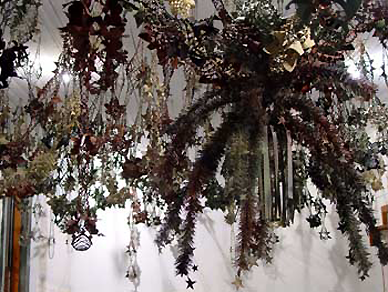 American sculptor Sam Durant may be best known for his backlit handwritten phrases, placed strategically on facades of buildings, as well as his cast upside-down tree stumps on mirrors. Exhibiting uncanny optical tricks while pointing to injustices of world history, his current show at Catriona Jeffries (274 East 1st around back, until April 14), “Scenes from the Pilgrim Story: Natural History,” features stray mannequin parts in colonial dress, among other quaint knick-knacks. Should be creepy. Jane Benson’s “Underbush” opens at the Helen Pitt Friday, March 23 at 8 PM. Surprisingly accomplished with maneuvering thousands of suspended foil cut-outs, she creates a giant, awesome pattern of foliage that exudes its own heavy atmosphere. Emily Carr students Ana Szaflarski and Manolo Lugo are in the back gallery there the same night. In their case, it would be safe to expect subtle meditations on diaphanous abstraction in paint and sculpture.