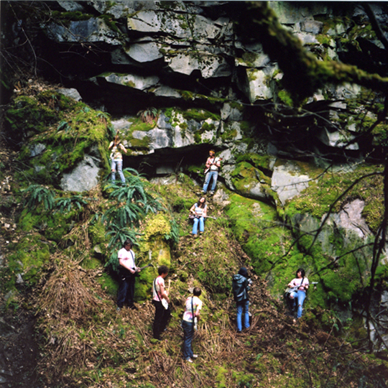 Laura Piasta makes drawings, videos and sculptures. Her formally inventive work re-imagines a romantic attitude to life. She has a show with Michael Drebert opening at Blanket on March 15.

ONLY: Your work often seems to contain outside things that we know from the world or that you have collected, like the album covers that you turned into orbs last year. Is art your way of dealing with stuff that you like or know about?

Laura Piasta: I’ve always been interested in collage as a way of working with existing material things. It’s interesting, even just the notion of thrift store shopping: looking through objects and junk. You can just go to the thrift store and it’s like going to a museum. I was looking through hundreds of records, finding similarities, trying to find out what these albums were. How we visualise sound was also interesting to me: the synesthetic relationship to music, and how record covers were almost like the precursor to music videos. It’ll have either the musician or something that’s supposed to represent the music visually, and you have it in your hand when you’re listening to the music. So you have this connection and a narrative that you produce in your mind, but it’s just from one image. The sculptures were an experiment in lumping a mass of them together in order to try to make something new.

ONLY: You use “things” in your work a lot, but it seems like you do something to them so that they are not static, making them more loose, like taking apart those album covers and making them into an abstract shape: it’s solid, but it’s airy. Your drawings are also very subtle, but they have a strong optical power.

LP: Last year I got interested in physical objects that were real objects, but were used for transcending into different worlds. I was really interested in scrying mirrors: looking into mirrors to look into different dimensions. Other physical things, like record covers, seemed like that. Like crystal balls.

ONLY: You’re into music and you play in a band. It seems that when music comes into your art, like your video of kids playing guitar in front of a cave (The Bolero Project), you’re kind of idealising it. Do you think music is more perfect than other kinds of art?

LP: I think a lot about music. With The Bolero Project I was interested in the collaboration and the group effort: the romantic ideal of playing music together with people, trying to perform in thought. Another thing that’s interesting about music is how it’s time-based. The video is 15 minutes and the duration reveals the piece. You have to remember what you’ve heard previously.

ONLY: I know that you used to be a skateboarder and that you still do ballet. How have your athletic activities influenced your art?

LP: Ballet was kind of my first art form. From when I was 5 until I was 15 or so, all I did was dance. It’s had a big impact on the way I think. I’m really connected to the visual. Ballet is extremely formal and romantic. It’s rigid, and those are things that I still think about, music being connected to that. Dance is interesting because it’s the visual representation of music, and it’s also a narrative.

ONLY: Do you think of nature as a place, or as a person or an animal?

LP: Neither. When I think of nature, I think of lots of things, but I don’t think of mountains, I think: where is the line drawn? With the cave [in The Bolero Project] we were thinking we wanted this cave to be a stage setting, a background. Living here, nature is already our backdrop: we have the city and we have the mountains behind it. It’s the cave as the first place of shelter for man, and nature being shelter, and then that being not nature.