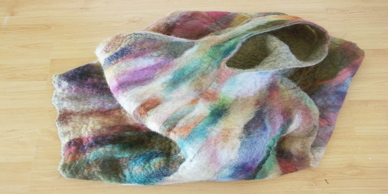 A bad trip in the forest

Rebecca Brewer is graduating from Emily Carr this spring. Her paintings and objects are like somebody out of an Edvard Munch wandering an Irish moor through a wispy veil of BC bud. Her first solo show will be at the Helen Pitt’s Back Gallery February 9 to March 17.

ONLY: What does your art do for you in your life, how does it work as a part of you?

Rebecca: It’s something that I’ve done to get myself out of a slump that I was in a number of years ago, where I had dropped out of university. I had thought I wanted to be an historian, but I decided that actually what I cared about with history was something that I wasn’t getting out of actually studying history. Something about collective consciousness and participating in history, and the experience of cultural flows. Then I became interested in art history and art. I’m really into how people around me are doing similar work at the same time. I feel like through my art I have a connection to the world around me that is sometimes otherwise lacking.

ONLY: What role does other people’s art play in what you do? What artists do you like that set you off or encourage you?

R: I come across things and then I become obsessed with them. I’ll be in a Bosch phase or something for awhile, or Breugel, or I’ll want to look at Munch every day. Right now my instructor gave me a bunch of Tal R. catalogues and all of a sudden I’ve started to paint much more sloppily.

ONLY: I want to ask you about when you’re painting. Describe the feeling when you’re moving toward finishing something.

R: Finishing a painting is the feeling of an elation that builds up as the marks start to take on the exact quality of what you wanted. It’s almost a magical or mystical experience: getting into this trance where you’re manifesting this thing and you’re not sure why, but it’s very much what you want to convey, and the marks just start to kick in. It’s a pretty scary thing, I think. I wouldn’t say it’s like giving yourself over, because I don’t think I’m a particularly expressive painter. I have a very strong thematic agenda. But I think that the theme and the way it’s painted are really intermingled.

ONLY: Do you want to be inside your paintings?

R: Some of them are pretty scary. I think they’d be a really scary place to be, because a lot of them come out of a hippy nostalgia memory that I have. I was totally a goofy wannabe hippy when I was younger, and I did acid and mushrooms and smoked pot all the time and went in the forest. I think that for one reason or another, the scarier aspects of that experience are always coming out in the paintings. I’ve never actually thought about that before, but it’s a place I don’t think I would
want to visit. They’re swampy and bad-trip-like, but colourful at the same time. They’re deceptive; they have that dual nature.