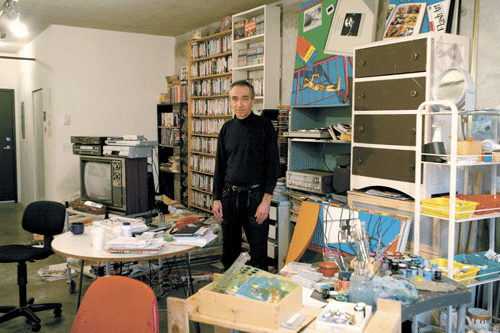 David Ostrem is Vancouver’s veteran Pop Artist. His photorealistic paintings are concrete poems of cultural connoiseurship. Over the past three decades he has shown his work in venues ranging from coffeehouses to the VAG.

ONLY: Who were your earliest influences?

David Ostrem: Well, I didn’t go to an art gallery until I was 21. I had a keen eye for art but it was popular art. I liked the Disney look of comic books: the solid color and the solid lines. But when I started studying art I became envious of the pioneers of the modern movement and the Impressionists. I liked the way that they always seemed to use these room situations with windows. I don’t know exactly what they were up to, but I started working at applying inner space and outer space. I tried to evoke both spaces on the same canvas.

ONLY: Tell me about your photography.

*D: Before I started art school I was looking at various media cultures from different sources: books, magazines, records, comics, toys… I thought, “Why not just cram everything together in one composition and force them to work together?” So I started taking all kinds of pictures. Some of them are messy conglomerations. The ones that seem to have a bit of an “identity,” those are the ones I kept. With the photos, I was trying very hard to make genuine art, which I think I succeeded in some cases. I’ve continued with the same concept; now it’s about paintings instead of photos.

ONLY: Do you ever use contemporary source material?

D: I try not to get out of my own turf. I keep things that I think are important roots for present day life. I’ve always felt really fortunate that I was born in 1945, because it means that I’m exactly the same age as the post-war era. I wasn’t in every important place of influence, but I have a real good sense of how things presented themselves to an ordinary person who lived in an ordinary place and had access to ordinary things like television. So, I try to use that experience to make art that “looks right” and speaks to people of the present day. In 2006 we’re still going on the things that were established after World War II.

ONLY: You have an amazing video collection.

D: That is a hobby completely out of control. I started out thinking that there was certain imagery that might be helpful and that I should save certain things. I developed a real fondness for certain genres of movies. These days I’m mostly into pre-code talkies. In 1934 Hollywood was clamped down on by the authorities because the movies were getting to risquÃ©, and so after that movies became much more prudish. But in 1929, when sound came in, there were hundreds of movies that weren’t particularly well-made but they had adult themes and all kinds of stuff. Real frank stories about office girls tempted by prostitution.

Ostrem’s drawings and photographs will be shown at Blanket Gallery until January 15.