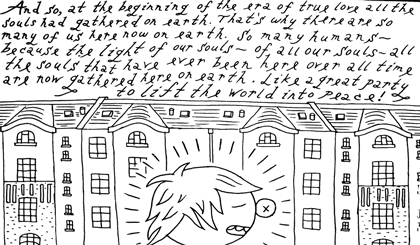 It kind if looks like a banana Acts of Transformation: From War Toys to Peace Art is currently on display at the Museum of Anthropology. It showcases toys of violence that have been transformed by children into art objects of peace. The kids painted the toys tempera-bright colors and attached labels with their writing, serving as artist statements: “I painted this gun yellow, because it kind of looks like a banana. It’s not, but if I imagine that it is a banana it is. Which is a lot like peace,” or “If you removed the handle of this gun it would just be a toy to blow bubbles.” The show includes a giant dollhouse painted to look burnt with a family inside watching the television; The destroyed house shows the reality of the violence that the family can’t experience because they are busy watching the news.

Developed in cooperation with BC schools, the show is a reflection of discussions at school about the ideals of peace–a tradition in public schools dating back to the day boomers were old enough to teach. Children are taught to take the moral high ground before they are actually guilty of contributing to an international situation that is incomprehensibly complicated. Their perspective is a standardised innocence, filled with heavy moral concepts that they will keep on the back burner for the rest of their lives.

The show’s glassy-eyed optimism was reminiscent of Ron RegÃ© Jr’s latest comic, The Awake Field (published by Drawn and Quarterly). RegÃ©’s comics are filled with animal-like humans, magic spirits, sparkles, nature, and, most recently, peace. The Awake Field features a series of “peace comics” written by RegÃ© and his wife. In one comic, two characters find a box filled with peace signs and talk about driving across the country and sharing them with America, as peace belongs to everyone. In another, someone reads a newspaper that describes peace as cool and protests that he thought of the idea first. Much of the text reads as follows: “Some people will tell you that there will not be peace on earth because there never has been peace on earth. But this statement is an illogical statement that is false. That’s like if I told you that there was going to be a blue sky but there had never been a blue sky. You’d never believe me.”

While RegÃ© and the children that contributed to the exhibit share their ideals and their undeniably charming rhetoric, something divides them: twenty years. Rone RegÃ© Jr is a grown adult who went to art school and has been self-publishing comics ever since. While some might argue that his work is ironic posturing, RegÃ© clearly favours passion over postmodernism. His comics are emphatically sincere, telling the reader over and over “this is not a joke.” It’s natural for children to regurgitate doctrine, but there is something special about an individual independently re-discovering the importance of these ideas and wanting to make them heard loud and clear.

Despite the differences in age, experience, and education these two different artistic bodies do, in fact, believe the same thing: World Peace Now! Believe in it and it will come.