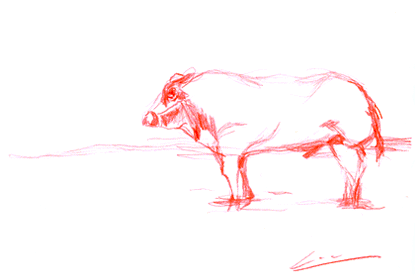 Offering a fitting segue into Vancouver’s grey-sky season, the Belgian anti-virtuoso single-handedly responsible for the proliferation of “Paint-the-Banal” assignments thrust on every second-year art student since the late ‘90s, Luc Tuymans, will be lecturing on his bleak and muted oeuvre at the VAG on Wednesday, November 8. Meanwhile, it being Halloween and all, here’s hoping that my favourite–the big black Catriona Jeffries wig–gets some play as the preposterous-yet-restrained Geoffrey Farmer tinkers endlessly with his 727 jet interior and other sundries at CJG, until the 19th. There are new shows in the front and back at the Helen Pitt: group show LatentCity with guest curator Werner Whitman, and Jeremy Hof with new student curator Steve Hubert, respectively. The Altered Image at Equinox features collage work by beloved West Coast old-timers Jack Shadbolt and Gordon Smith, among international stars such as Gerhard Richter and comparative youngsters like Etienne Zack.