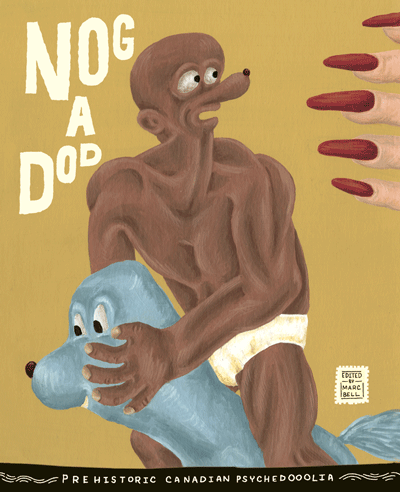 While it may not seem like the biggest tragedy to wake up, get out of bed, start thinking about the mundane details of your life and forgo any chance of remembering the subterranean stuffings of your dreams, it is a loss. A small chunk of you is gone forever. Fundamentally, this sucks because, while we supposedly prize our individualism, we’re letting important little pieces of ourselves fall through the cracks of daily life with its demands for logic. Fortunately, Nog a Dod, 288 pages of “prehistoric Canadian psychedoolia”, dredges up some of the most wonderfully bizarre imagery to ever see the light of day. The loose, expressive and unpredictable images in this art-packed book provoke interpretation and laughter in equal measure, allowing you to vicariously dream some the strangest stuff on this planet.

Marc Bell, one of Vancouver’s foremost purveyors of self-published art booklets, has edited together ten years worth of material from a loosely affiliated group of Vancouver artists. Bell is well positioned as editor not only for his immaculate perfectionism but also because he’s produced art on his own and in collaboration with most of the artists in Nog a Dod. On his own Bell has produced a prolific outpouring of titles: Shrimpy and Paul, Knoze Clippah, Ruff Worn Elbow, There Is Nothing + MORE!, The Stacks… the list goes on and on. Throughout all of this work, Bell maintains a consistently precise style that depicts ineffable moments of head-scratching silliness. His pen doodles together pop culture references, comic book motifs and fine art abstractions with equal aplomb, a beautifully fucked-up style that’s developed over the past ten years in tandem with other artists in Vancouver such as Jason McLean, Amy Lockhart, Owen Plummer and Jonathan Petersen. The mammoth accomplishment of Nog a Dod is the bringing together of over a 108 solo and collaborative works by these artists and more.

Nog a Dod not only documents art booklets that, until now, have only been available at a handful of galleries, fares and book shops; it also presents the material in a way that makes it make some kind of sense. In “Book of Sweden,” which opens the collection, Jason McLean and Peter Thompson trade off absurd reworkings of JFK’s face. Playing with pictures is juxtaposed with a mucking about with words in the next selection where S.P. Ehmen beat(-nick)s Lawrence Ferlinghetti at his own game. The variety that abounds through the rest of the book includes the optical-orgy collages of Tommy Lacroix, Amy Lockhart’s sketchily scuffed up reimaginings of “cute” cartoon characters and the quilt-like texturing of Jonathan Petersen’s dreams. Bell guides us through all of this with simple sign-posts that explain the whens, wheres and hows.

Basically you have to see this for yourself by getting your mitts on a copy at Six Acres (203 Carrall St.) on September 8,2006 which will be the official Nog a Dod launch.

Fuck nightly dreams; I want to Nog a Dod my days away.