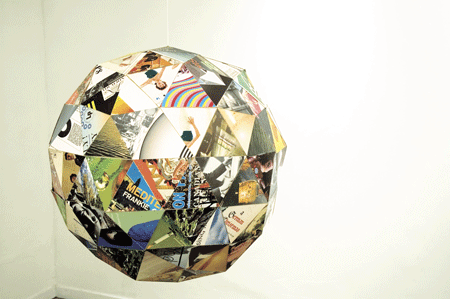 Conceptual artists are mystics rather than rationalists, they leap to conclusions that logic cannot reach. That was sentence number one in Sol Lewitt’s famous sentences on conceptual art, the most important one, and its truth has not been lost on a younger generation of Vancouver artists. This is in evidence in two current shows by young Vancouver artists who are all still in school at Emily Carr. Laura Piasta and Annika Rixen’s We Boast Our Light, But If We Look Not Wisely On The Sun Itself, It Smites Us Into Darkness, is showing at the Helen Pitt back gallery and Mat Buschell’s untitled exhibition is at Blanket Gallery. Both shows run throughout March and work with ideas around mathematical structures and data as abstract forms and experienced phenomena.

In the back of the Helen Pitt, Laura Piasta has constructed a geodesic sphere that hovers in the middle of the gallery. Built out of numerous cardboard triangles cut out of vintage 12” record covers found at thrift stores, she attempts to merge pop culture design with the almost otherworldly utopic design of Buckminster Fuller’s geodesic structures. Unlike our geodesic Science World that languishes in decay at the end of False Creek as a monument to corrupt developer scams disguised as international celebrations, it is psychic architecture that’s at stake in this work. Piasta, who is also a musician with The Book of Lists, is combining disparate ’60s iconography in some sort of alchemical process that is beyond the power of language to describe, but that may yet produce some new understanding of the period.

Also in the back gallery at the Helen Pitt, Annika Rixen has a string piece that is delicately built from nearly invisible gold coloured threads that attach to the far wall and then converge on two points in the ceiling at opposite sides of the room. It is a strange sort of transcendental folk art, this sculpture exists somewhere between minimalism and string art from a hobby kit.
Over at Blanket Gallery, Matt Buschell is showing two recent pieces that (like Rixen’s string piece) exist at the threshold of perception. In particular his large untitled composition is a slow circular fade from a black core to a white background that makes the edges of the shape impossible to find. This zone of liminality frustrates the body’s attempt to spatially orient itself and produces various degrees of nausea depending on how long one stares into the picture. However, unlike Vancouver based Neil Campbell’s ‘non-representational shapes’ designed to elicit ‘somatic responses,’ where in an extreme case, one piece is said to have caused a seizure in a Vancouver Art Gallery patron, Matt Buschell’s abstractions seem a little less evil. He works with computer-generated images as a way of visualizing the traces of the system’s architecture left by the machines themselves. He programs a computer to almost infinitely repeat a minor Photoshop operation on a piece of visual information until it assumes a form that is unrecognizable from the point it started out at. He forces the computer to have a nervous breakdown or an existential crisis and then prints a large light-jet output as an aesthetic interface between the viewer and the computer.