A train of thought in Vanderhoof 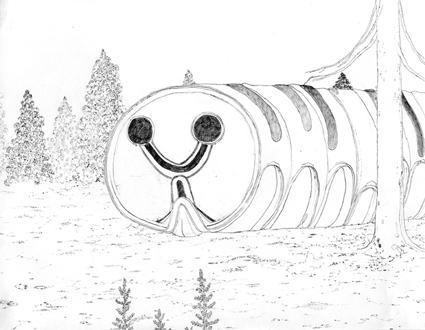 Outbuildings and Livestock, a show of drawings by Vancouver artist James Whitman, were recently on display at the Helen Pitt Gallery as part of a duo-show with Robert Niven’s Bewilderness.

Only: What’s that big creature in the forest that pops up in a few of the drawings?
James Whitman: The creatures come out of a kind of playing with face. You could imagine him sliding through the brush and he’d leave this big trough in the ground behind him. Mostly he’s just there to stare at you and look like some kind of ‘other.’ It’s handy to use this figure in a few drawings but he’s not like a character with a personality. I don’t have to worry about what he might do when he’s not in the picture.
Only: Where does the title Outbuildings and Livestock come from?
JW: I originally had this idea to make a coherent fiction or depiction of a place. I was thinking of all these creatures and buildings as the sort of thing you might come upon when wandering about in the woods, where all the trees were cut down 15 years ago but most have grown back since and the land is being used for livestock before it gets sold as five-acre lots. The title’s similar to a phrase you’d see in an ad for a property outside of Vanderhoof, BC.
Only: Are you drawing these different forest scenes from life?
JW: I haven’t drawn any landscapes from life for a few years now. I used to draw in this field behind Pacific Central Station before they put a building in there. A lot of my landscape vocabulary comes out of that, trying to depict the shimmer of things; looking at a field there’s always way more there than you can see, grass and weeds all moving around in the breeze. Most of the settings come out of my memories of living in the interior of BC, using my own abstract doodling to depict the surface of things and the general topology. The images come out of a play with ornament and that abstract vocabulary as much as anything. I like to let it get to the point where the lines get out of hand and stop fulfilling their depictive function, asserting their materiality.
Only: Having background in collaborative drawing, specifically The Lions (www.lionspile.ca), is it more difficult for you to finish a drawing without that secondary, tertiary, etc., presence?
JW: When I work with people there’s more freedom from my self-imposed parameters and it’s more about goofing around. Taking on different styles you can be a chameleon. A lot of the pleasure of group work is being prompted to do something you wouldn’t usually do, making something you couldn’t think of on your own. You also make a lot more drawings. Many hands do make light work.
Only: How is your drawing practice crossing over into Kiku-Haux, your music/performance collaboration with fellow Lions member Lief Hall?
JW: Drawing is a big part of the project. We’ve been making hand-drawn shirts and we like to make drawings and posters and Lief makes these great CG animations of big floating heads for our shows. It’s play. We like extravaganzas, and we like to make our shows overloaded. We always try to have a couple of new things each time we play, which can become quite demanding for each show.